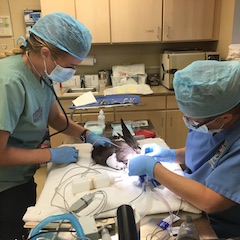 On December 2, a snail kite was admitted with severe head trauma and fractures in both of its wings. It is believed to have been hit by a car.

Snail kites are an endangered species, both federally and locally in Florida, however they are more common throughout much of South America. Snail kites are a specialized hawk and as their name suggests, they feed primarily on apple snails.

The snail kite was taken into surgery this morning to evaluate the damage from its head trauma and possibly eviscerate, or remove, its eye. It was determined it would not be necessary to eviscerate the eye.

The kite has become more alert. It is now eating snails willingly that are removed from the shell and fed to it using tongs. Surgery to repair its injured wings is planned for tomorrow.

The snail kite underwent surgery today to place pins in the fractured right ulna. A splint has also been placed on the fractured left metacarpals. The kite will continue to receive pain medications and daily bandage changes over the weekend. It will also begin receiving physical therapy to maintain muscle strength and range of motion in its wings.

The snail kite continues to receive regular bandage changes to check and clean the clean the pin sites. The kite will also receive physical therapy every few days to ensure it maintains strength and range of motion in its injured wings.

The kite's right eye has failed to show the necessary improvement since it was decided not to remove the eye on Dec. 4. Today, veterinarians made the decision to remove the eye. Surgery is scheduled for tomorrow.

Veterinarians say the kite's fractures are healing fairly well and it may be beneficial to be moved to an outside enclosure to help reduce stress. It continues to have a healthy appetite and eats plenty of snails.

The splint, which was placed on the kite's left wing to stabilize the fractured metacarpals on December 7, was removed after radiographs showed a strong bony callous has formed at the fracture site. 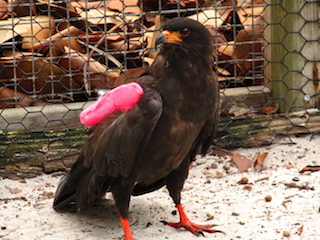 The snail kite was moved outside to the "Osprey" enclosure. It has continued to have a great appetite. Its eye and wings continue to heal. The kite is able to stretch its wings on its own in the enclosure and has been observed making short flights. 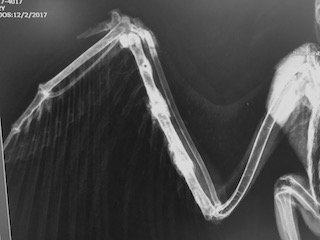 The intramedullary (IM) pin, which was placed in the kite's right ulna on December 7, was removed this morning. The kite will remain inside the hospital to monitor the pin sites, but will be moved back outside in a few days to continue its flight conditioning. 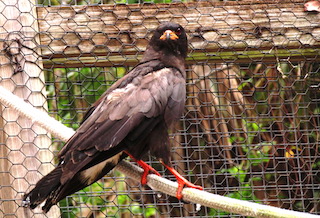 After a few days of observation inside the hospital to ensure the pin sites remain free of infection, the snail kite was moved back out to the "Osprey" enclosure. Its appetite remains very strong and has been flying in the outdoor enclosure.

The snail kite was moved to "Large Flight", a bigger enclosure to allow for longer flights. Check in on the kite on our live webcam in this enclosure. 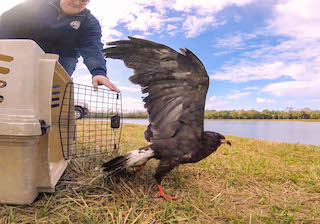 The federally and locally endangered snail kite was released at Harns Marsh Preserve in Lehigh Acres. This area has documented populations of snail kites and an abundance of apple snails.