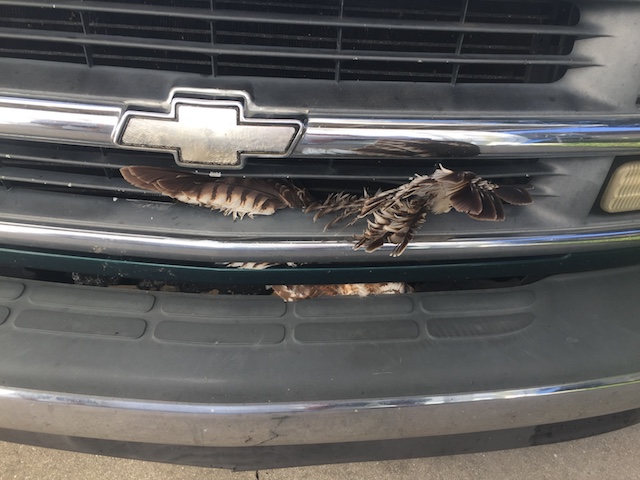 The red-shouldered hawk has been through quite the ordeal. A truck traveling across Alligator Alley (I-75) in the Everglades struck the hawk on Saturday (9/29). The driver was unaware that the hawk had been trapped in the grill until they saw it the next morning. At first they thought the hawk was dead and went to remove it from their grill. They quickly noticed it was still alive and worked to free the bird by cutting the grill plate out from underneath it. Once it was out of the grill, the driver rushed the hawk to the CROW Clinic so it could receive medical treatment. 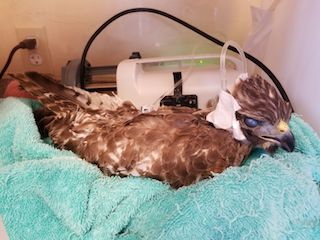 Veterinarians performed an intake exam on the juvenile hawk. It had a quiet mentation, likely from head trauma, but was still able to bite at the staff. The veterinarian was able to palpate, or feel, that the bird had a fractured radius and ulna of its left wing which was later confirmed using radiographs. The fractures had not penetrated the skin and were simple fractures, meaning they were relatively clean breaks, however the location of the fracture presents a challenge. Veterinarians worked to stabilize the bird by providing IV fluid therapy, pain medication and placing it in a oxygen chamber. Once the hawk stabilizes, surgery to place pins to stabilize the fractures as they heal can be performed in the next couple days. 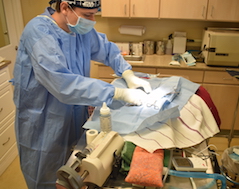 The juvenile red-shouldered hawk underwent surgery this morning to repair its broken wing. Veterinarians placed a total of three pins in the fractured bones. One was placed through the broken pieces of the ulna and one in the radius. A single cross pin was also placed. 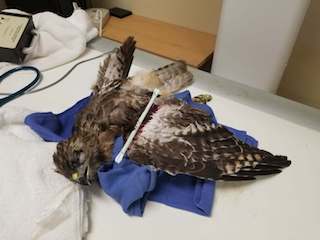 Once the pins were in place, their positions were checked using radiographs. Seeing that the placement was correct, the veterinary team then connected the ends of the three pins using an external fixator. The external fixator consists of a plastic straw filled with methyl methacrylate, a polymer that hardens to form a rigid connection. 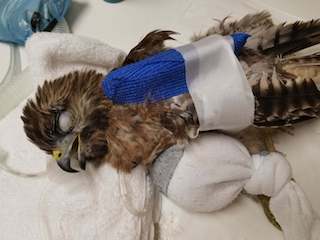 Once the external fixator had solidified in place, it was wrapped in a bandage. A body wrap was also used to help the hawk hold its wing against its body and minimize movement as it heals. The patient was then allowed to recover from the anesthesia. 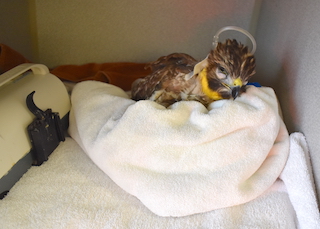 The hawk has recovered from the anesthesia, but still remains a bit out of sorts. It is placed in an enclosure with a nest made from a towel to keep the hawk upright and comfortable. It continues to receive IV fluid therapy. 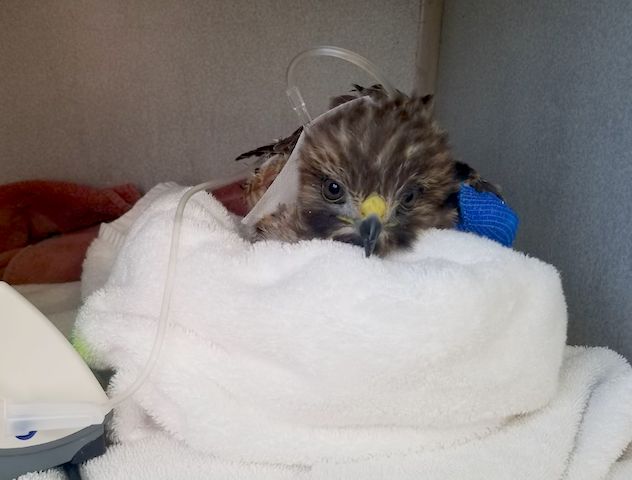 The young hawk received its first bandage change following its surgery yesterday. Veterinarians say the surgical site and pins looked clean. They applied a topical antibiotic to help prevent infection and keep the sites clean, then replaced the bandage. The staff also noted that the hawk was much brighter on the front end and was even biting at them, however it is not yet standing. 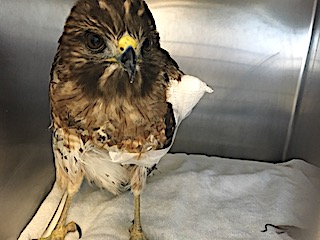 The red-shouldered hawk was standing in its enclosure this morning when staff arrived to the hospital. The veterinary team plans to begin physical therapy tomorrow on the wing that was pinned. Physical therapy is important to prevent contracture and maintain muscles needed for flight. The hawk was also offered a mouse, but has yet to eat on its own. 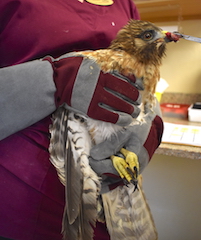 Veterinarians performed physical therapy this morning on the birds injured wing. For now, it will continue to receive physical therapy every other day. They also changed its bandage, which is a daily occurrence. By the afternoon, the hawk had tore away part of its bandage and it had to be replaced again. It is still not eating on its own when food is left in the enclosure, but is tolerating being tong fed mouse pieces.

Veterinary staff stated that over the weekend the hawk has started to eat the food that is left in the enclosure for it, a sign that it feeling better. A re-check of radiographs to determine the progress of healing the bones are making is slated for later this week.

The hawk continues to receive bandage changes and physical therapy every three days. Veterinarians have expressed concerns for the hawk re-injuring its wing due to it being reactive to noise around the hospital. To help reduce stress on the hawk, staff has been ordered to remain quiet when in that area of the hospital, only speaking at a whisper.

Over the weekend, a fecal sample was collected from the hawk's enclosure. Using this sample, veterinarians were able to check for internal parasites which can be common in wildlife. The test for this hawk was positive for these parasites and the staff was able to provide the hawk with a deworming medication to kill them. 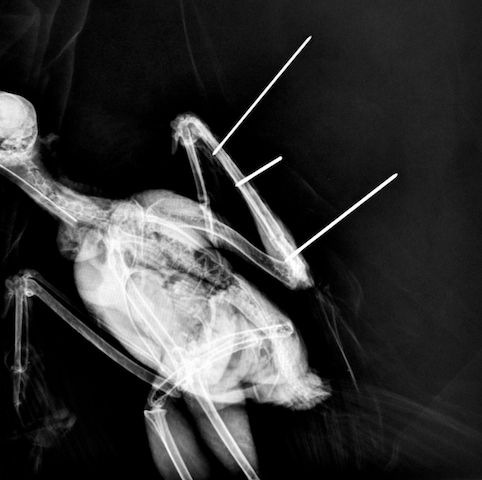 Recent radiographs showed that the fracture sites were still unstable and had not started to form a bony callous. A second surgery was performed this morning to remove the intramedullary pins from the ulna and radius, and reconfigure the external fixator using the cross pin already in place and two new cross pins placed on either side of the fracture. This reconfiguration was deemed necessary due to the complicated nature of the fracture. The hawk was also placed in a body wrap to help minimize movement of the wing. Its condition remains guarded, but should improve once bony callous begins to form. 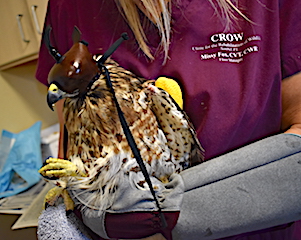 The hawk received physical therapy this morning and veterinarians also took another set of radiographs. The radiographs revealed that the fracture sites are starting to show signs of healing, however they also showed that the hawk may be developing arthritis in its carpus joint (this joint would be equivalent to a human wrist). Its condition remains guarded, but clinically, the hawk is doing well. It remains very bright and alert and continues to eat well. 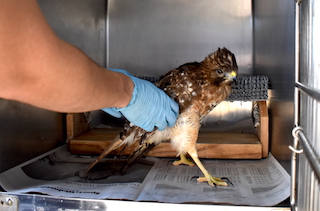 The hawk was anesthetized for its physical therapy session this morning, during which the veterinarians also took new radiographs to check on its healing progress. The bones do show callous is forming, but the veterinary staff remains concerned about a full recovery. The carpus joint, however, did look much better than the previous set of radiographs. The hawk will continue to receive physical therapy every three days and new radiographs, which should be more telling about the hawk's future, are slated for next week. 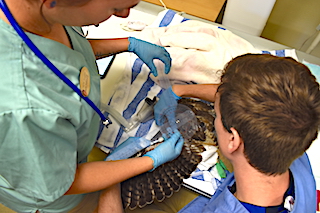 During today's physical therapy session, veterinarians noted that the hawk's range of motion for the injured wing had improved. The range of motion is measured with a tool called a goniometer. This tool measures the angle of the joints/bones when the wing is extended. A higher or wider angle means greater range of motion. New radiographs to check how the fractures are healing are still slated for later this week. 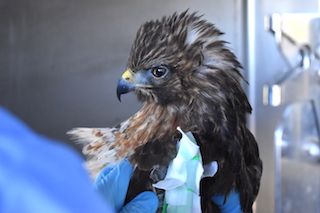 This morning, veterinarians performed physical therapy on the hawk and also took new radiographs. The bones were not quite as calloused as the veterinarians would have liked to see at this stage after surgery, so it was decided to leave the pins and external fixator in place for another week. The hawk also showed a small increase in range of motion when measurements were taken and the fracture is stable enough that the hawk could be moved into an outdoor enclosure. The hawk will be able to perform its own physical therapy by moving around the enclosure, which veterinarians hope will facilitate further healing of the bone and increased range of motion. Shortly after being placed in the outdoor enclosure, the hawk was observed flying from one end to the other and up to a higher perch! 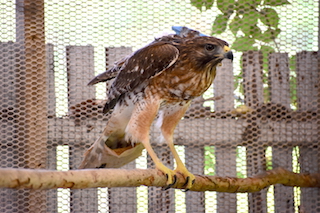 Rehabilitation staff report that the hawk has been doing well in an outdoor enclosure. It continues to eat well and has been seen on the higher perches in the enclosure. A re-check of radiographs is slated for tomorrow to see if the pins are ready to be removed. 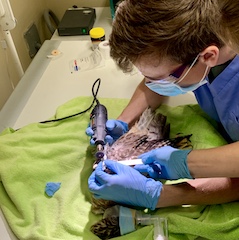 Veterinarians removed the pins and external fixator from the injured wing of the hawk this morning. Veterinarians say the fracture site palpates, or feels, very stable. The range of motion in the elbow joint is still not where it needs to be, but they are hopeful it will improve with continued physical therapy. The hawk will spend the next few days inside on strict cage rest before moving back to an outdoor enclosure.

The injured wing continues to palpate, or feel stable, however radiographs appear to have a mixed bag of callus formation and concern for a nonunion remains. The range of motion of the elbow continues to improve.

The red-shouldered hawk was moved back to an outside enclosure today to continue its rehabilitation after a week of strict cage rest since having its pins and external fixator removed.

The hawk was noted to have increased respiratory sounds outside by the rehab team. It was brought inside and examined. Veterinarians noted it to have audible crackles, consistent with upper respiratory issues, however, there may be lower respiratory sounds that are covered up by the loud upper airway sounds. The hawk was moved into oxygen and started on antibiotics and antifungal medication to treat any possible infections. The team plans to obtain radiographs and blood work when the hawk is more stable.

The hawk had less audible crackles today. It was moved out of oxygen. Full radiographs of its chest and wing were taken with the patient awake. The fracture site does not have ideal callus formation, but palpates, or feels, stable at this time. Range of motion appears static, but no measurements were taken since the hawk was not sedated. Veterinarians suspect an upper airway infection over pneumonia at this time, although they cannot rule out a lower respiratory issue. It's bloodwork was unremarkable. They will continue to monitor the hawk's respiration and it will continue to receive medication to treat any possible infections for 5-7 days. Once hawk is stable and eating well, it can move back outside. 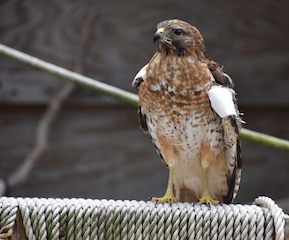 Veterinarians say that the hawk's lungs are sounding much better. Over the last week, the hawk had a decreased appetite which may have been due to the medications. Once the antifungal and antibiotic meds were discontinued, its appetite returned. The hawk has been moved back outside to a slightly larger enclosure than it was in before to allow for it to do its own physical therapy on the injured wing. As can be seen in the photo, it is still drooping its wing a bit. 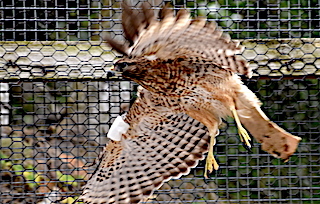 Veterinarians did a re-check radiograph of the hawk's wing today. Although the radiographs are still not ideal for what the veterinarians would like, the hawk has been flying well and the bones palpate stable enough that they were comfortable moving it to a bigger enclosure. It was moved into the "Large Flight" enclosure. This enclosure features a live camera that can be viewed on our website at www.crowclinic.org/webcams. With a watchful eye, you may be able to catch a glimpse of the hawk practicing its flight.

The hawk was observed on our camera flying from a perch in the middle of the enclosure down to the end. Veterinary staff say it now shows no evidence of respiratory disease and that its body condition remains good. If the hawk continues to show good flights, the staff plans to see how it does with live prey testing.

Rehab staff have reported that the hawk has shown strong flight capabilities including controlled aerial maneuvering and flying the entire length of the “Large Flight” enclosure. With these strong skills, veterinarians may choose to forego live prey testing and clear the hawk for release sooner than expected.

After seeing the hawk’s strong flying skills, veterinarians have cleared the hawk for release. 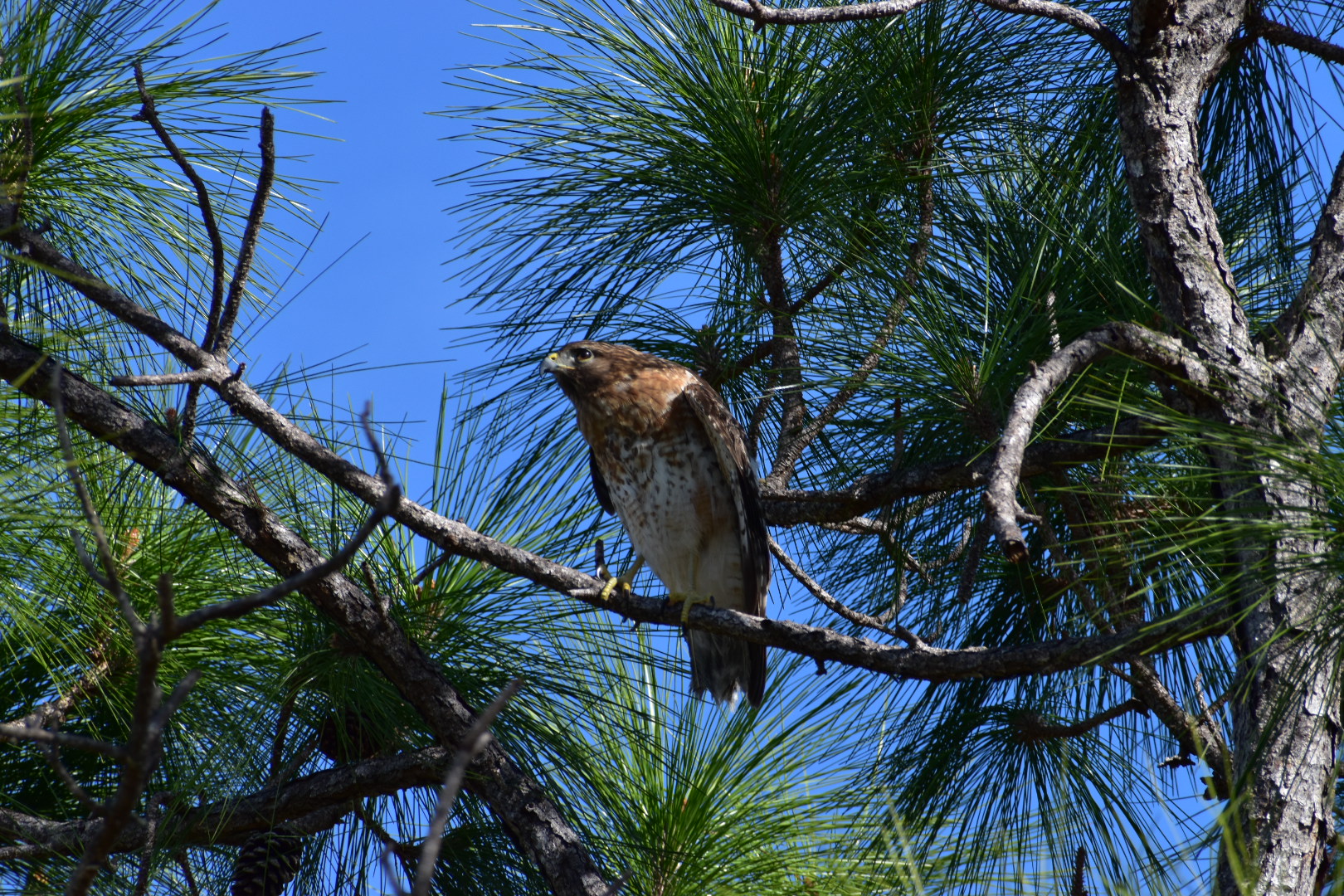 The hawk was driven to the Florida Panther National Wildlife Refuge and released near where it was believed to have been hit along Alligator Alley.