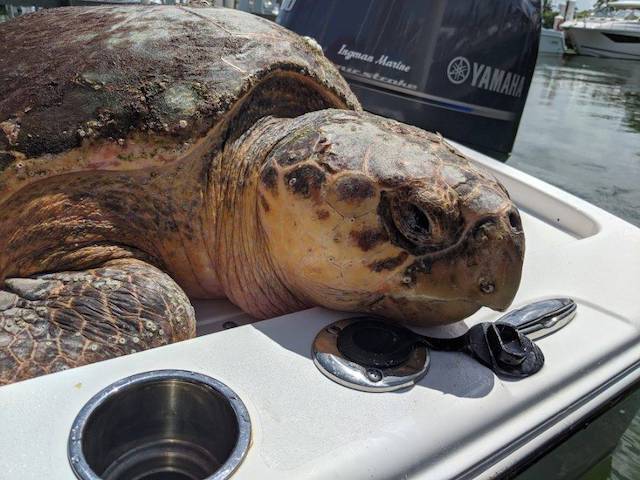 A 215 pound loggerhead sea turtle was admitted to the #CROWClinic after being found floating with his rear end up, a condition we call "bubble butt". 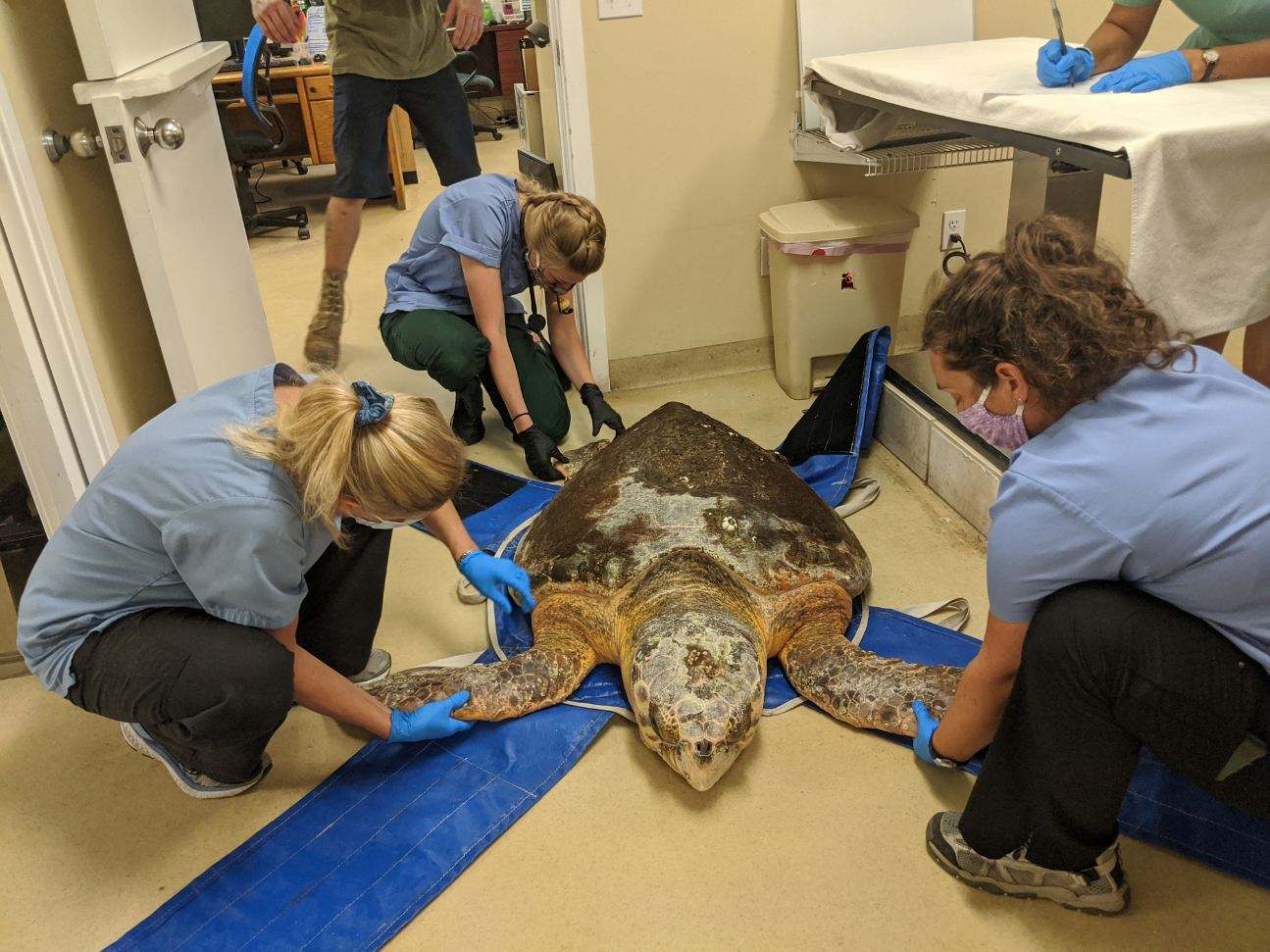 When the turtle arrived, the veterinary team performed an intake exam to assess its condition. A series of diagnostic tests including bloodwork, radiographs and physical exam, were performed. The team was unable to immediately determine the cause of the the turtle's condition, but some potential reasons include gas/foreign body in the GI tract, pneumonia, trauma or systemic disease. The turtle was noted to be very lethargic throughout the exam. 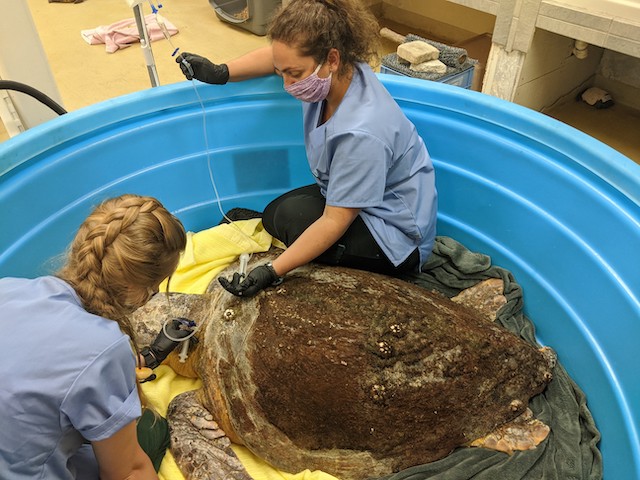 After the intake exam was complete, the team administered IV fluid therapy for the turtle. After receiving the first round of fluids, the turtle appeared less lethargic and was able to be placed in an indoor pool in the Reptile room with shallow water overnight. 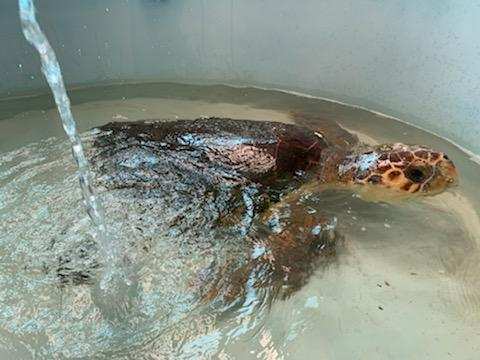 The following morning, the veterinary team gave the turtle another round of fluids. He was then moved to a larger outdoor tank in the Sea Turtle Barn. The tank he was placed in contained less than two feet of freshwater so that he could easily lift his head out of the water to breathe. Staff did not notice any abnormal floating when he was placed in the water. The turtle is placed in freshwater to help with hydration and removal of any algae or barnacles growing on his shell. 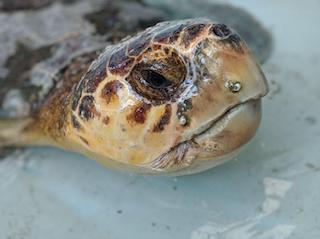 The tank the turtle is in requires daily water changes to ensure it is a clean environment for the turtle's recovery. After the pool was drained, more fluids were given to the turtle with an IV. When refilled, brackish water was used. The salt content in the water will gradually be raised to that of the Gulf of Mexico over the next few days. The turtle was offered food, but has not been interested in eating yet. 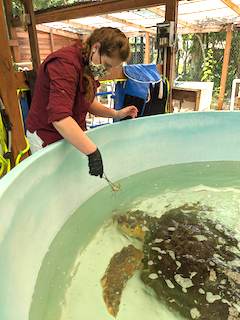 Since it is a possibility that the turtle's condition is caused by a GI obstruction (like from accidentally ingesting plastic) it is important for staff to get him eating as soon as possible to help him to pass the obstruction. Thanks to a donation from Whitney's Bait & Tackle, rehab staff was able to offer him some huge blue crabs, one of the loggerhead's favorite foods, to entice him to eat, but he is not showing much interest yet.

The rehabilitation staff reported that the turtle is no longer floating and is able to submerge fully underwater. They have continued to offer him a variety of foods to entice him to eat, but he has shown little interest besides taking a few nibbles at the food. The veterinary team plans to perform an ultrasound and more radiographs early this week to help determine if something is indeed blocking his GI tract.

One of the only ways to tell the difference between a male and female sea turtle is by the size of their tail. In males, the tail (which also contains their penis) extends beyond the end of its shell. For this turtle, the tail just barely extends past the shell, so it was thought to be a female until yesterday. While the turtle was out of the water for the rehab team to provide treatment and clean the tank, his penis prolapsed or came out. This is typical when a male turtle is out of water due to the change in pressure on its body. 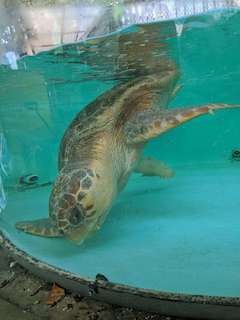 Rehabilitation Manager Breanna F. provided this update on the sea turtle today: The turtle has been very quiet since admit and had no floating issues until yesterday. He randomly went sideways in the tank which is consistent with GI gas. He defecated and new x-rays showed that the GI is moving slightly. We have done IV nutrition today and yesterday as well as IV or subcutaneous fluids to help with rehydration. His packed cell volume is high (mid 50s, should be 20-30s) which is typical with dehydration.

Over the last week and a half, the turtle's health has remained static and has not shown much improvement. He has yet to eat on his own, so rehab staff continue to provide nutritional support through IV and tube feeding. Radiographs over the last few weeks have shown that his GI is not moving. A surgery, which can be viewed on our live camera, has been planned for tomorrow morning to hopefully determine what is blocking him and if it can be removed. 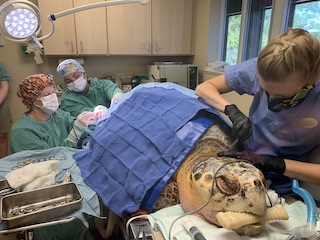 Yesterday, the turtle underwent surgery to find and remove a blockage in his GI. During the 7-hour surgery, the amazing veterinary team was able to locate and remove an excessive accumulation of crab shells, other food items and feces that had caused an obstruction in the large intestine. The turtle recovered from anesthesia and was 'dry-docked' inside the hospital overnight. This morning he was doing well and was able to be transferred back to his tank in the Sea Turtle Barn. He has been given lots of antibiotics and will be very closely monitored for any signs of infection following the surgery.

Over the last week, the turtle has continued to receive supportive care as it recovered from surgery which removed an accumulation of shells and debris from his large intestine. Recent radiographs show there is still some blockage that remains that the veterinary team could not reach from the right side and were hopeful would loosen after the first surgery. A second surgery, which can be viewed on the live cameras, is planned for today. This will be similar to the first surgery, but from the left side to remove the remaining blockage.

Since the second surgery to remove more blockage, the turtle's health continued to decline. Over the weekend, it had regressed to where veterinarians had to accept that the turtle was not going to be able to recover and make the call that no one wants to make to ease his pain and discomfort.