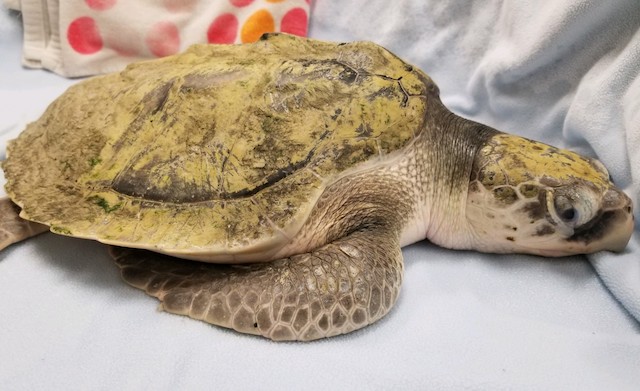 This juvenile Kemp's ridley sea turtle was found floating in the waters of Estero Bay near the Fish Tale Marina in Fort Myers Beach, Florida. The turtle was rescued from the water and transported to CROW by volunteers with Turtle Time. It did not have any apparent injuries, but was noted to be in respiratory distress by the Turtle Time volunteers. 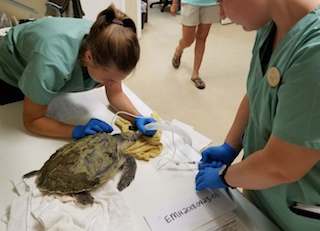 Upon intake to the hospital, the little Kemp's ridley sea turtle suffered some seizure activity. Veterinarians work quickly to provide initial treatments for the turtle which included antibiotics, fluid therapy for severe electrolyte abnormalities, and a novel treatment for red tide poisoning. It was given supplemental oxygen during the treatments to help with its respiratory distress. 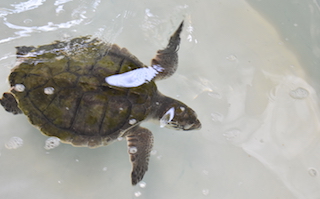 The turtle has improved neurologically. It still has delayed palpebral reflex in both of its eyes, but faster than on admit. It has shown stronger movement in all 4 limbs and is moving its head around more. Respiratory signs have resolved. The turtle was moved into a shallow tank. The water is kept shallow so that the turtle is able to make it to the surface to breathe. It is monitored when it first goes in the tank to be sure it is capable of swimming properly.

For the last couple days, the young Kemp's ridley turtle has been eating well on its own. Each of the last three days, it ate two whole squid and 4 more squid heads. Rehabilitation staff provided some environmental enrichment today by attaching greenery to a mat that was placed at the bottom of the tank.

The juvenile sea turtle was noted by rehabilitation staff to be swimming normally in the tank and continues to have a strong appetite.

The turtle has been medically cleared for release and approved by state officials. It was tagged using a passive integrated transponder (PIT) tag. It is too small to receive flipper tags.