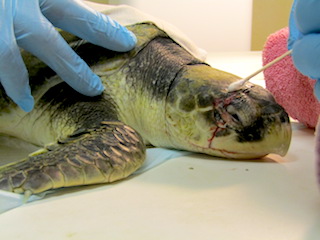 This juvenile Kemp's ridley turtle was found in Charlotte Harbor after it had been struck by a boat. It suffered multiple shell fractures and cuts from the boat's propellor. 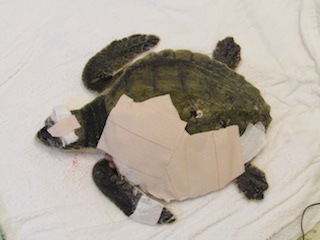 At intake, veterinarians took radiographs and placed bandages over the open wounds and fractures of the turtle. It was also given pain medication. This morning, the bandages were changed and the wounds were more thoroughly assessed. Surgery is planned for tomorrow morning to repair the shell fractures. 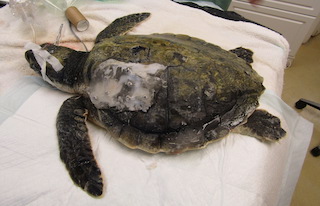 Surgery was performed today to place screws and wire to stabilize the fractured pieces of shell. Once the screws and wire were in place, the fracture sites were covered in methyl methacrylate to help keep the sites dry. A laceration, or cut, on its left front shoulder was sutured closed. The laceration across the face of the turtle was treated topically with antibiotics. 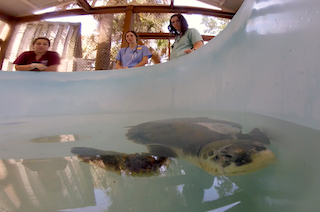 CROW Rehabbers sealed the edges of the methyl methacrylate with silicone to make it waterproof. The turtle was then placed in one of the large tanks and allowed to swim around while being monitored by Rehab and Veterinary staff. 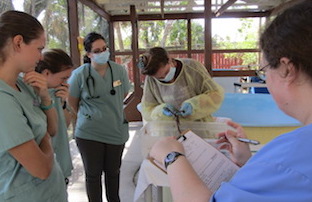 A full necropsy was performed on the turtle. The necropsy showed the turtle's left lung had collapsed and was not functional as a result of the boat propellor strike. In death, the turtle provided a valuable learning experience for CROW's current students who assisted with the necropsy.