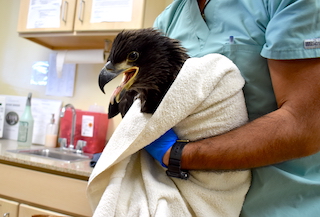 In Florida, bald eagle nesting season runs from October through mid-May. Eggs are typically laid in December and January with eaglets fledgling, or leaving the nest, at around 10-12 weeks of age.

This fledgling bald eagle was admitted from Alva, Florida. It was reported to have been on the ground for a few days with no attempts to fly. The parents were in the area and feeding its sibling in the nest, but it was unclear if they were feeding the youngster on the ground as well. 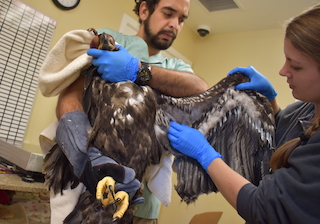 Veterinarians examined the eaglet and noted that it was thin and its crop was empty. No broken bones were found, but the eaglet did have a moderate left wing droop. The team performed 'plop' radiographs and ultrasound which showed some areas of concern in the lungs that may be the result of a trauma like falling from the nest or a fungal infection called aspergillosis. Bloodwork was within normal limits.

Staff noted there to be no apparent wing droop this morning. The eagle was sedated and full radiographs were taken. The radiographs confirmed that there were no orthopedic injuries and continued to show areas of concern in the lungs. An intravenous catheter was placed to provide the eagle with fluid support. It was offered fish fillets which it ate on its own.

The eagle continues to receive medications to treat the areas of concern int he lungs along with fluid support through the catheter. It continues to eat readily including rats, fish fillets and other offerings. A re-check of the lungs using ultrasound is planned for tomorrow.

Veterinarians re-checked the lungs today using ultrasound. The areas of concern have shown improvement. The eagle continues to be very enthusiastic about eating and has been gaining weight since it was admitted.

The eagle has been very bright and alert in its enclosure and was noted to be running around and perching. The intravenous catheter used for providing fluids has been removed by the veterinarians. 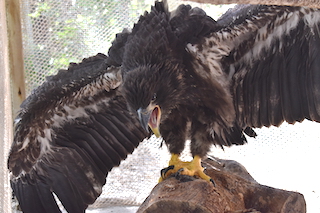 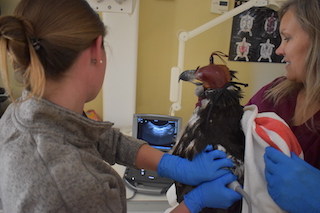 A re-check of the eagle's lungs was performed today using ultrasound. Veterinarians noted the areas of concern are still improving, but remain present in the lungs. The eagle continues to receive antifungal medication to treat the areas. Its appetite continues to be strong and it is doing well in the outdoor enclosure.

Another check of the eagle showed that there were no longer signs of respiratory issues. The eagle had also been observed perching on the highest perches in the enclosure (which can only be reached by flying to them). It was cleared for release by veterinarians and returned to the area of the nest it came from in Alva, Florida.