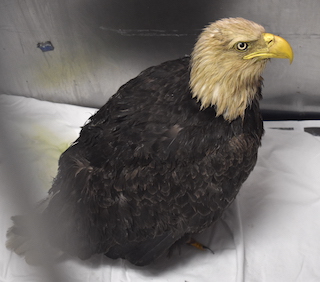 Bald eagles are one of the most iconic species in North America, with their white head and tail, and yellow beak and feet. This iconic look is acheived at an age of 5 years when they reach sexual maturity.

After being observed down near a construction site and several unsuccessful attempts at capture due to it being able to make short flights, this adult bald eagle was rescued and transported to the CROW Clinic for treatment. 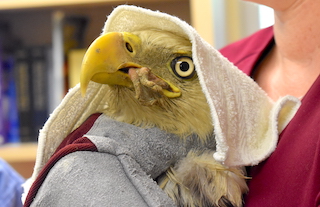 Veterinarians noted the eagle to be very dirty when it arrived to CROW, The rescuer noted there to be concrete in the construction site where it was found. This raised concerns for the veterinarians. Additionally, the eagle also had wounds on its left wing and abrasions on both its feet. One of the most striking things about this bird was its tongue. The tongue appeared to be dried and was 'stuck' in a way that it was out of the mouth. This was likely an older injury that this bird has been living with for quite some time. 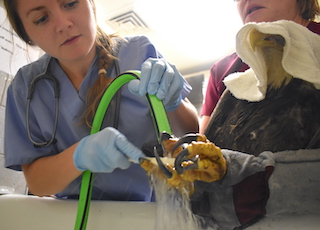 One fo the first things the veterinarians did after assessing the eagle was wash the feet and talons of the mud/cement/debris that they was caked on them. Due to the wounds on the feet, which may have been from fighting with another eagle, getting them clean and determining the extent of the wounds was a priority. Other treatments planned after the eagle has a rest include placing an IV catheter to help administer fluids. Concrete can rapidly deplete the body of fluids and if it was indeed in concrete, hydration will be a major concern. Veterinarians also plan to bandage the wounds on the wing and feet, give a bath with Dawn dish soap to remove dirt from the feathers and start the eagle on a feeding plan this evening. 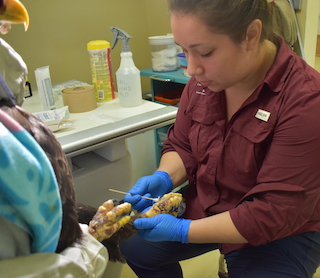 Last night, veterinarians placed an IV catheter to help administer fluid therapy to hydrate the eagle. The eagle was not a fan of the catheter and "tore it to shreds" according to staff. This morning, what was left of the catheter was removed. While the eagle was out, staff also provided wound management care for the laceration on the wing and abrasions on the feet. Additionally, staff placed a tail guard to protect its tail feathers from being damaged while in the hospital and treated it with a dusting for parasites. Veterinarians plan to take radiographs, but did not feel any broken bones or concerns during the physical exam. A plan for addressing the tongue injury is still being determined, if necessary at all. 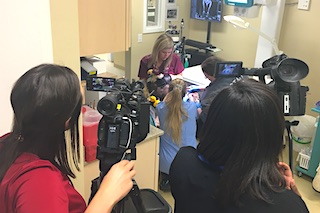 Radiographs taken over the weekend did not show anything unusual. This morning, the bandage on the eagle's injured wing was changed and it also received a vet check with local media outlets present to film the CROW team in action. Veterinary staff noted parts of the wound to be infected and to have dying tissue which they will need to clear away by surgical debridement. While the eagle is under anesthesia, staff will remove the end of the tongue, a portion which is dead tissue, but will leave most of it intact so as not to affect the eagle's ability to eat. A portion of the tongue will likely still protrude from the mouth once the end has been removed. They will also biopsy a mass that was seen at the back of the eagle's throat. The surgery, which is planned for tomorrow, will be streamed live on our website via the webcam page and is expected to take place in the late morning or early afternoon.

Veterinarians are preparing for surgery on the eagle today. During the surgery, veterinarians plan to anesthetize the eagle and surgically clean the wound on the left wing by removing dead and infected tissue as well as the tongue. As with any surgery in which anesthesia is used, there are risks associated. Additionally, veterinarians are unable to assess the extent of the infection and dead tissue until they are able to cut away the top layers. We are hopeful for a good outcome, however, if the infection has already spread to affect the underlying tendon and bone of the wing, the eagle would not be able to make a full recovery without the wing being amputated. Unfortunately, due to the location of the injury, this would not be an option as the eagle would need both wings to be able to balance and stand properly. Humane euthanasia may be the only option remaining for the veterinarians, but they remain hopeful this will not be the case. We will continue to provide updates as they are available and you can watch the surgery by clicking the 'Live Cameras' tab at the top of the page (on a mobile device, click 'Menu', then select 'Webcams'). 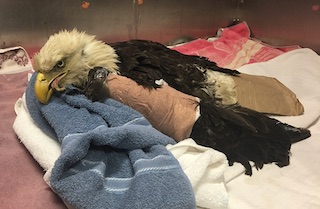 The eagle is now recovering after undergoing surgery today. The initial plan was to surgically clean the wound on the wing and the tongue, however, the wing ended up needing more attention than first thought. The veterinarians removed what dead/infected tissue they could and bandaged the wound. The bandage will be changed daily over the next few days and the team will provide wound management to keep it moist and promote healthy tissue to grow and heal the wound. A skin graft may be needed to help ensure it heals properly. Veterinarians will address the tongue at a later date. Because it is an older injury that is not immediately affecting the eagle's health, it has a lower priority than the wounds that need immediate attention. The eagle's prognosis for recovery remains very heavily guarded and only time will tell how the wound is going to respond to the treatments provided by our veterinary team.

The eagle was sedated for its daily bandage change today in which veterinarians again debrided the wound. The wounds on the legs that were sutured shut yesterday did not need bandages. For the wing wound, veterinarians noted 'good granulation tissue forming at dorsal aspect of wound between tendons'. They also performed physical therapy on the wing which had good range of motion. The eagle still has a long recovery ahead and the wound on the wing can take a turn at any point. It will be important for veterinarians to continue aggressive wound management and care if the eagle is to have a chance at release. 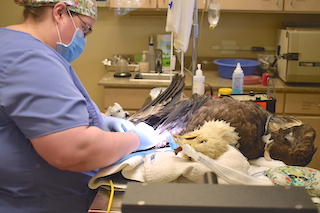 Over the weekend, veterinarians continued aggressive wound management and daily bandage changes. They noted some areas of the wound continued to have good granulation forming during the bandage change on Saturday. However, on Sunday and this morning, they noted the wound to be dry. They continued with bandage changes and removing as much dry, dead tissue as they could to keep the healing areas as healthy as possible. If the wound continues to look good tomorrow, they may attempt to do a skin graft to help close the wound. If it continues to dry out or the tissue around the edges of the wound are not healthy enough for a graft to hold, they may be out of options.

Veterinarians anesthetized the eagle today for the bandage change and a potential skin graft if the wound was healthy enough. Unfortunately, the tissue on the backside of the wound had also begun to die around the feather follicles. While a skin graft may have been possible for the front of the wound, it would not be possible to graft around the feathers on the backside. Additionally, the tendons of the wing which are vital to flight had also begun to die. Veterinarians made a very difficult decision to humanely euthanize the eagle despite their best efforts to be able to save the wing. You can hear more on the decision from Dr. Heather Barron by copying this link into your browser: https://www.news-press.com/videos/news/2019/11/19/injuries-wing-bald-eagle-too-much-overcome-sad-realities-saving-areas-wildlife/4243389002/