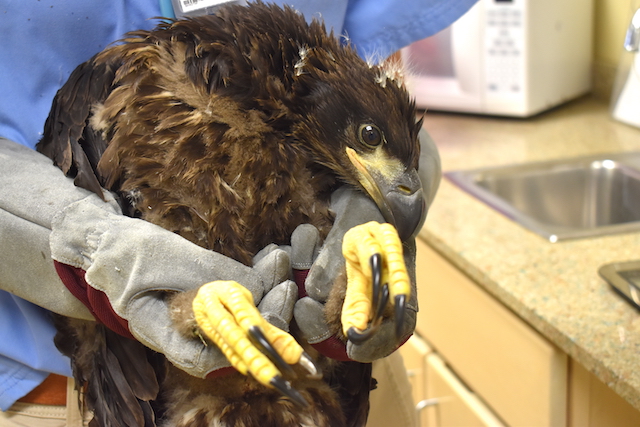 Follow this Patient and get patient status updates as they occur

Behind Alaska, Florida ranks second as the state with the highest population of American bald eagles. Once endangered by hunting and pesticides, bald eagles have flourished under protection.

On March 5, a nestling bald eagle (#19-0519) was admitted from St. James City on Pine Island. The eaglet was found on the ground beneath its nest and had a depressed mentation upon admission. The young eagle also has a damaged left eye which makes its future uncertain. 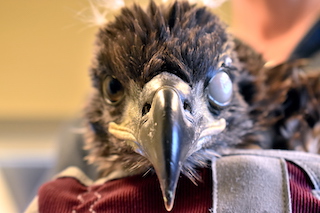 During the eagle's intake exam, veterinary staff took a weight and assessed the eagle for injuries. Due to its depressed mentation, it was placed in an oxygen chamber to rest. Staff later took a blood sample for testing and placed a catheter to administer fluids to help rehydrate the young eagle. Photos of the damaged eye were taken to consult with an ophthalmologist (a specialist in the diagnosis and treatment of eye disorders). 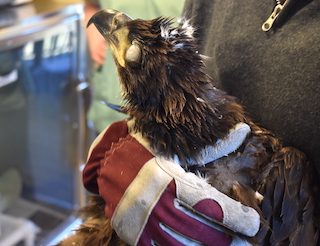 The eagle was more alert this morning than it was upon admission. Diagnostic testing from the blood sample obtained shortly after intake showed that the eagle was anemic. Veterinarians also stated that the eagle had a higher than normal external parasite burden, was dehydrated and very thin. A treatment plan was started to address these issues before the eagle will be able to have surgery to remove its damaged eye. Unfortunately, the eagle will not be releasable, but may be able to be placed in a permanent captive facility if it recovers. 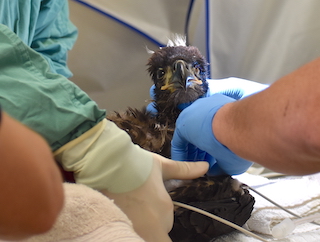 Due to the damage to the eye being caused by infection and potential for it to spread, the eye needed to be removed. This morning, veterinarians determined that the young eagle was stable enough for surgery to remove the eye. Dr. Lela Larned performed the surgery to remove the infected eye. Once removed, the eye was sutured closed. The eagle was recovered from anesthesia uneventfully.

Over the weekend, the eagle was reported to be doing well with its post-surgery recovery. The surgery site is healing appropriately. The eagle has also been noted to be eating on its own. The eagle was very emaciated when it was admitted, but has been gaining weight. Eating on its own will help it return to a normal body condition. 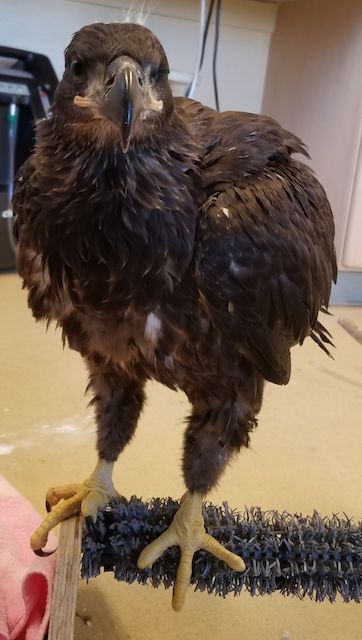 The eagle started receiving some perching and balance training yesterday. Staff allow time for the young eagle to practice its balance on a variety of perches, as it would be at this age in the wild. The site where the eye was removed has healed well after surgery.

Over the weekend, the young eagle was moved to a small outdoor enclosure. Veterinarians have discontinued the antibiotics it was receiving after its surgery. The normal approach to rehabilitating an animal is to be as hands-off as possible to ensure the animal is able to be successful in the wild. However, since this eagle cannot be released, staff will work to condition it to be comfortable around humans so that it can be successfully placed as an educational ambassador.

The young eagle was recently moved into our "Osprey" enclosure. This larger enclosure gives it space to start practicing short flights, which rehab staff have reported it has been doing this week. The staff also continue to work with the eagle to ensure it is used to people being around. This is not our normal approach, quite the opposite in fact. But, since this eagle is non-releasable, it is vital that it be adapted to being around people so that it will make an excellent education animal. Not only will it reduce the stress on the bird throughout its life in captivity, but will also ensure the safety of its future handlers if it is not trying to talon their eyes out. 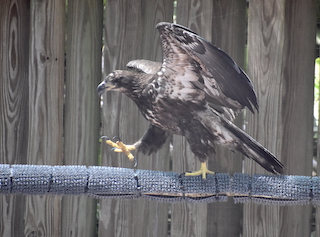 We are happy to share that after months of work to find a suitable home, submit the paperwork and receive the proper permits, our one-eyed bald eagle (#19-0519) is finally on its way to a permanent home in captivity! The eagle left the #CROWClinic this morning and is en route to World Bird Sanctuary in Valley Park, Missouri.