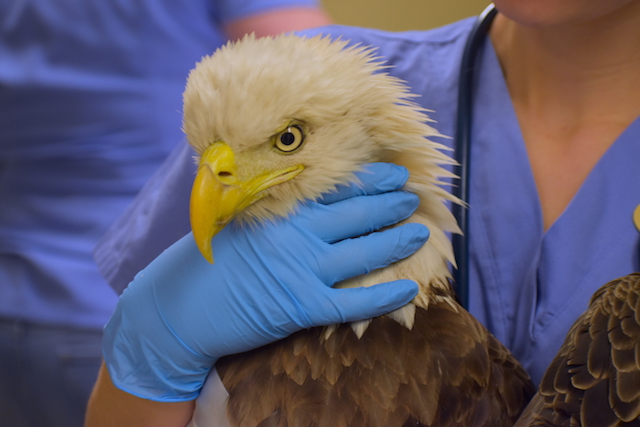 Bald eagle nesting season in Florida runs from October 1st until the eaglets fledge, which is typically around May 15th of the following year. On Thanksgiving Day, an adult bald eagle was admitted from Cape Coral, Florida after it was seen on the ground, unable to fly and dragging its wing. Upon admission, the eagle was also noted to be thin and had mild abrasions on its feet. 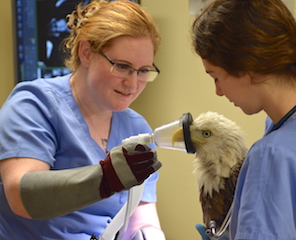 A "plop" radiograph last night revealed that the eagle was not able to fly due to a fractured right coracoid bone, which is similar to a collarbone in humans, and it was placed in a body wrap. This morning, the eagle was anesthetized for a full set of radiographs that allowed veterinarians to better assess the injury. Afterward, the body wrap was replaced to immobilize the eagle's injured wing. 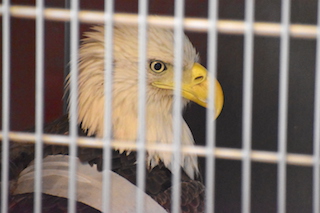 Over the weekend, the eagle was noted to be eating well, perching on the perch provided in its enclosure and to be very aggressive. Veterinary staff have had trouble keeping the wrap in place because the eagle has been pulling it off. The eagle will receive physical therapy later today. 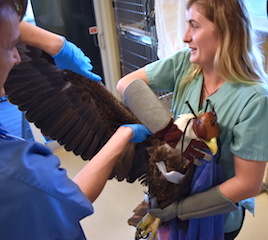 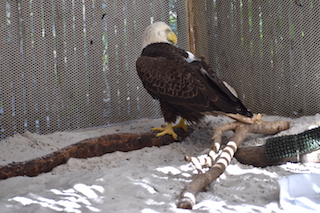 Earlier today, the bald eagle was moved to a small outdoor enclosure. The eagle remains in the body wrap, but the enclosure is larger and quieter than the ones in the intensive care unit of the hospital and will help to reduce stress. The enclosure is small enough that the eagle will not attempt to fly if it is able to remove its body wrap again and contains multiple types of perches for the it to stand on. 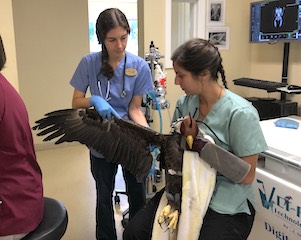 The eagle was brought inside today and sedated for physical therapy on its right wing. Veterinarians report that the eagle still has good extension of all joints, but the shoulder joint is still unstable. They also report that the abrasions on its feet are looking much better. Its body wrap was replaced after the physical therapy session and the eagle was returned to the outdoor enclosure once it recovered from the sedation. 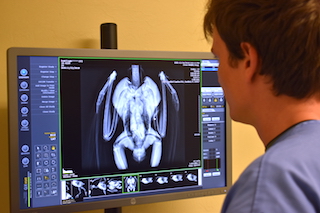 During the eagle's scheduled physical therapy session today, radiographs were taken to check on its fractured coracoid. Dr. Abbott stated that there were "positive signs of healing" at the site. The eagle's body wrap, which was in place to help immobilize the wing while the fracture heals, was able to be removed today. The eagle will remain in a small outdoor enclosure for another week before being moved through progressively larger enclosures to regain its flight and build up its muscles. 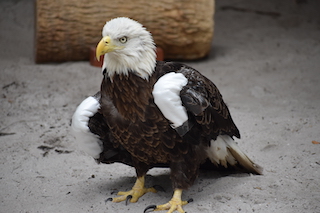 The eagle continues to do well as it recovers from its injury. Today, the veterinary and rehab staff placed new carpal bumpers and moved the eagle into the "Osprey" enclosure, a slightly larger enclosure than it was in before. This will allow for more space for the eagle to do its own physical therapy as it is starting to make short flights. It does still have a bit of a droopy wing from the injury, but rehab staff is keeping an eye on it.

When the eagle was moved into the Osprey enclosure yesterday, staff placed GoPro cameras in the enclosure to monitor how the eagle adjusted to the move and to help monitor if it continued to droop its wing when people were not around. When the cameras were reviewed this morning, it showed that the eagle was taking multiple short flights across the enclosure. 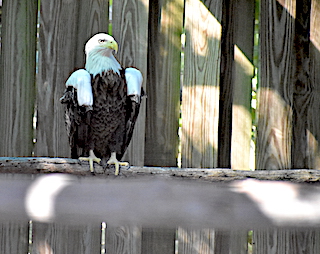 The eagle continued to show it was capable of short flights in the "Osprey" enclosure. Over the weekend, it was upgraded to the "Large Flight" enclosure which will allow the eagle to continue working on its flying skills and to practice longer sustained flights.

The eagle has shown great flying ability in the "Large Flight" enclosure. The fractured coracoid bone is now stable and looks good radiographically. Veterinarians have cleared the eagle to be released. 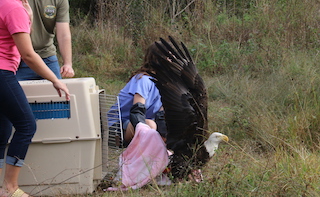 The bald eagle was released this morning at Yellow Fever Creek Preserve in Cape Coral, not far from where it was rescued on Thanksgiving day!