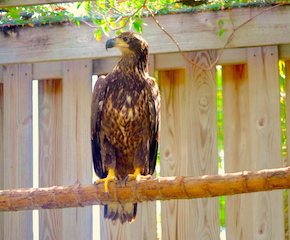 On May 13, E8 returned to CROW for the second time after being struck by a great horned owl that resulted in a broken leg.  After 3 months of recovery and a successful rehabilitation the eaglet was released on August 13, 2016.

E8 was first brought to CROW on February 10, 2016 as a result of its leg being entangled in monofilament line. After having the line removed and spending a few days recoving, the eaglet was returned to its nest on February 12, 2016.