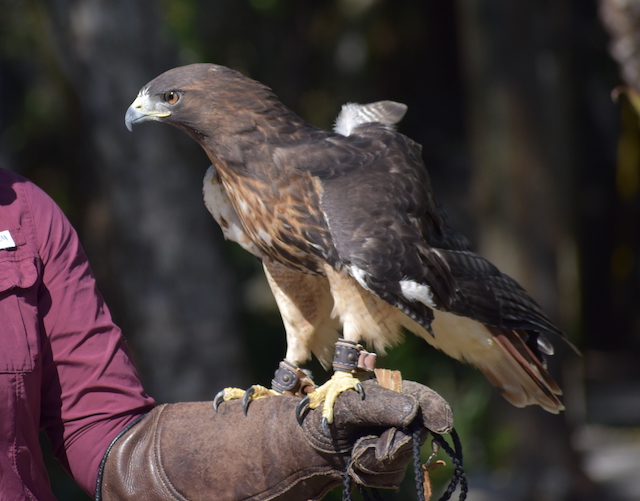 SANIBEL, Fla., (June 25, 2020) – A red-shouldered hawk rescued on Sanibel is back in the air after receiving a life-saving blood transfusion from Talon, a red-tailed hawk Animal Ambassador at the Clinic for the Rehabilitation of Wildlife (CROW).

The injured hawk was rescued near the Timbers Restaurant & Fish Market on June 9 after it was found hiding in the bushes and being harassed by a mob of crows. The finder suspected that the hawk had been struck by a vehicle.

The hawk arrived at CROW’s wildlife hospital with blood coming from its mouth and nose. Although no broken bones were found during its examination, the doctors were concerned about bleeding in its lungs based upon X-ray observations. The tested blood sample showed that the hawk was severely anemic, either from trauma or a toxin such as rodenticide.

“It's packed cell volume (PCV), which is the percentage of red blood cells in the blood, was only 10%,” according to Missy Fox, a certified veterinary technician at CROW. “Ideally, it should be around 30% for this species.” 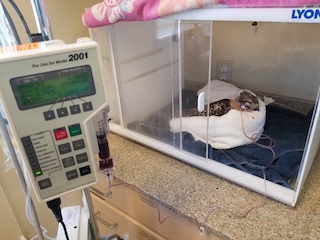 A life-saving blood transfusion was needed to help the hawk recover, however, there is no readily available blood bank for wild birds like there is for humans. Thankfully, Talon, a red-tailed hawk Ambassador who has resided at CROW since a wing injury prevented him from being returned to the wild in 2014, was ready to help.

"Talon donated blood, which we took from his leg and for over four hours it was transfused into the red-shouldered hawk,” says Fox. “The patient also received an antihistamine and was monitored to make sure there were no adverse reactions to the donated blood.”

By the next day, the hawk was looking brighter. After just a couple days, its blood was rechecked and showed its packed cell volume had increased to 34%, back within its normal range. The hawk continued to receive pain medication and treatment from the veterinary staff until it was eating on its own and strong enough to be moved to an outdoor rehabilitation enclosure. 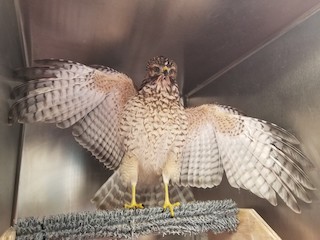 By June 23, just two weeks after being admitted to the hospital, the hawk was flying around and veterinarians determined it was fit for release. The hawk was returned to the area it was rescued. As CROW volunteer, Jim Columbo, opened the box, the hawk took to the air, flew off past the trees and back to its life in the wild.

As a 501(c)(3) non-profit, CROW relies on grants, generous donations from the public and funds raised through its AWC Visitor Education Center to provide the best care to its patients. CROW’s Visitor Education Center recently re-opened to visitors and its wildlife hospital remains open every day to receive and treat injured and orphaned animals in Southwest Florida. By visiting CROW or making a donation, you can help provide medical treatment, food and care for the thousands of patients admitted to the wildlife hospital each year.

Donations can be made online at www.crowclinic.org/donate/donate-today or CROW’s Facebook page!