Seeing is believing – CROW’s Visitor Education Center (VEC) houses live animal exhibits to compare and contrast invasive species found in Southwest Florida with native animals whose existence is threatened by their presence. Similarly, CROW has a number of animal ambassadors available for guests to meet during the daily presentations or at community functions and outreach events. Please visit our Group Programs page to learn about how to schedule a private educational experience.

CROW’s VEC currently has the following animal exhibits on display for the public during normal hours of operation:

Animal ambassadors were once recovering patients in Crow’s wildlife hospital. Unfortunately, they received injuries resulting in their inability for release. For this reason, they will spend the remainder of their lives either on CROW’s campus or at another wildlife center, zoo or aquarium across the nation.

These members of our education team help CROW to foster positive interactions with wildlife and the public in a monitored environment. Education improves a person’s awareness of these animals’ intrinsic value and increases their appreciation for the connection between humans, animals, and the environment.

Although animal ambassadors have been conditioned to be more tolerant of human contact, it’s crucial to understand that these animals are not domestic pets. They are wild and still maintain fears and anxieties as if they were in their natural surroundings. Proper safety must be exercised at all times, so ambassadors are ONLY handled by CROW’s staff, students and volunteers during programs. There is a strict “no touch” policy with all of CROW’s animal ambassadors. 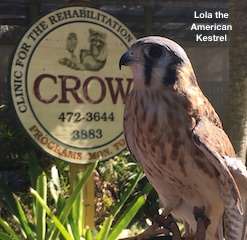 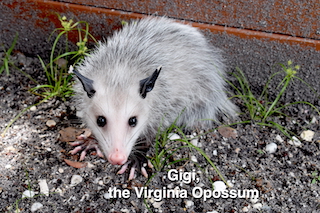 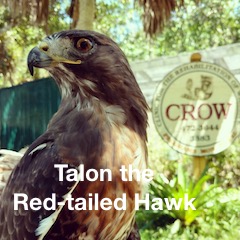 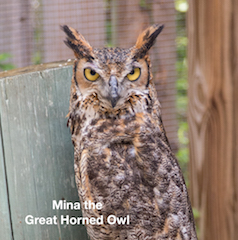 Native and Migratory vs. Nonnative and Invasive Wildlife Species?

Florida is home to a more than 700 terrestrial animals, 200 freshwater fish, 1,000 marine fish, numerous other aquatic and marine vertebrates and thousands of terrestrial insects and other invertebrates (www.myfwc.com). All of these organisms depend on the productive natural habitats of Florida as well as our sustainable recreational practices to survive.

Native animals are wildlife species that have historically occurred in Florida, regardless of the presence of humans. Migratory animals are those who utilize Florida’s geography and resources part of the year during seasonal changes to forage or breed.

Most of the nonnative animals, on the other hand, have been introduced to an area as a direct result of human interference. These actions can include planned placement of the Marine “Cane” Toad to eat agricultural pests or the release of the Red-eared Slider Turtle by inexperienced exotic pet owners. http://myfwc.com/media/2778705/pet_amnesty_program.pdf

Florida Fish and Wildlife Conservation Commission (FWC) states that more than 500 nonnative fish and wildlife species and 1180 nonnative plant species have been documented in Florida. Nonnative species that are able to become established as a population are later classified as invasive. Damage caused by invasive species can take different forms and in extreme cases can lead to the extinction of native species, disruption of ecosystem functioning, decimation of crops, or complete loss of recreation sites (USFWS 2012a).