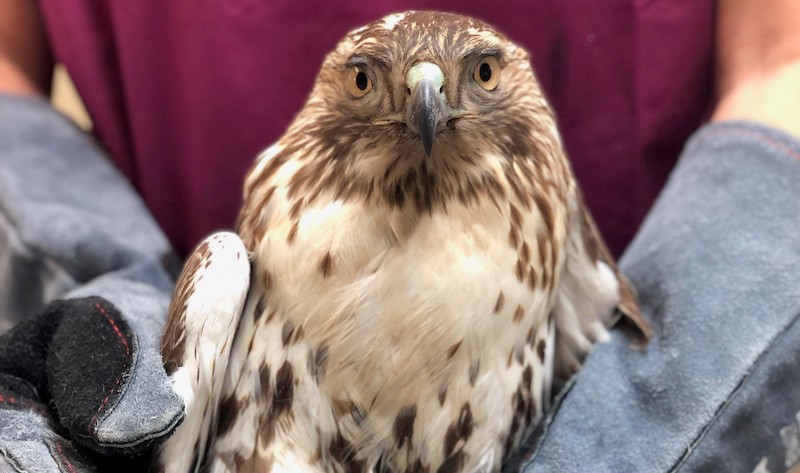 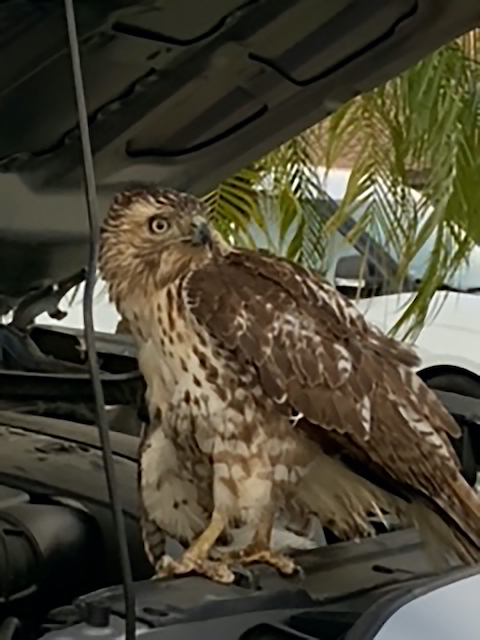 SANIBEL, Fla., (January 8, 2021) – A red-tailed hawk is recovering at the Clinic for the Rehabilitation of Wildlife (CROW) after being struck by a vehicle driven by a Dracut, Massachusetts couple traveling on I-95 through Virginia on their way to their winter home in Cape Coral, Florida.

“We heard a loud thud out of nowhere,” says Eileen Bellefeuille, who was in the vehicle with her husband Rudy when the hawk was struck. “We stopped shortly after and checked for damage and we saw that the grille was broken, but didn’t see anything else.”

It was not until they arrived to their destination on December 28, more than 24 hours later, that the hawk was discovered under the hood of the car. It had crashed through the grille and became trapped in the space between the grille and the radiator.

“Our neighbor came over and said there was a screeching sound coming from our truck,” continued Bellefeuille. “Rudy opened the hood and out pops this hawk. It tried to fly away, but couldn’t so we were able to get into a box and called the police.”

The Cape Coral Police Department referred Bellefeuille to CROW for care of the hawk. CROW staff directed her to take the hawk to a nearby partner veterinary location for transport by one of CROW’s volunteers to the wildlife hospital located on Sanibel Island.

When the hawk arrived at the clinic, veterinarians examined it and took radiographs. They found it had suffered fractures to both its radius and ulna bones in its right wing.  Veterinarians provided the hawk with pain medication and wrapped the wing to limit movement. On December 30, the hawk underwent surgery in which pins were placed to keep the fractured bone pieces aligned. 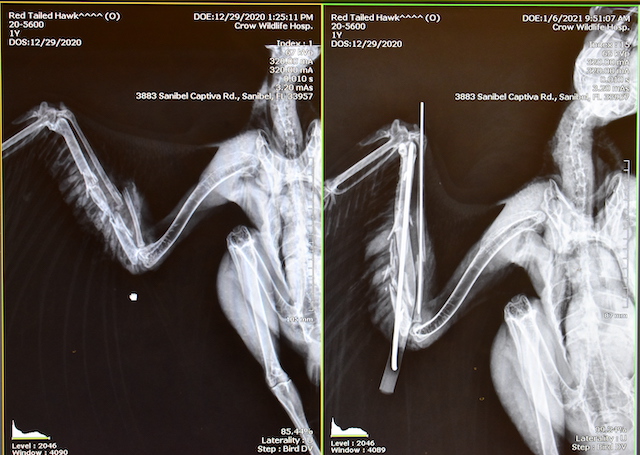 “We placed a total of four pins, one in the radius, one in the ulna and two cross pins,” says Dr. Heather Barron, medical & research director at CROW. “An external fixation was then used to keep the pins in place while the fractures heal.”

Since the surgery, the hawk, along with about 100 other patients, is receiving everything it needs from the CROW staff to heal comfortably. In this case, medications to help with pain management, antibiotics to prevent infection at the surgical site and lots of mice to maintain a healthy weight. As the bone heals, staff will also provide physical therapy to ensure the hawk has good range of motion in its wing.

“The hawk still has a long road ahead of it to a full recovery,” says Barron. “The pins will remain in place for three to four weeks, followed by a week or two of cage rest. If all goes well to that point, the hawk will be moved to an outdoor flight enclosure to begin building back its flight muscles.”