Gopher Tortoise Admitted to CROW May Be Largest on Record 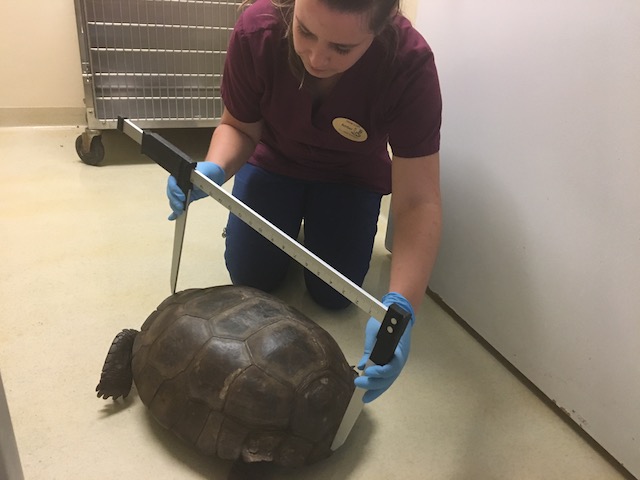 SANIBEL, Fla. (December 6, 2018) -- A male gopher tortoise was admitted to the Clinic for the Rehabilitation of Wildlife (CROW) on Sunday, November 25. State officials believe it may be bigger than the current largest gopher tortoise on record.

“The current record tortoise was documented near Labelle in Hendry County, Florida in 2016,” says Kelly O’Connor, a gopher tortoise conservation biologist with the Florida Fish and Wildlife Conservation Commission (FWC). “It weighed 14.5 kilograms and had a straight-line carapace – a tortoise’s upper shell – length of 42.7 centimeters.”

The male tortoise admitted to CROW last week tipped the scales at 15.26 kilograms and measured 44 centimeters, according to the veterinary staff. The tortoise was rescued in Koreshan State Park when rangers noticed it was acting lethargic and appeared to have diarrhea. 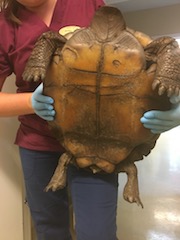 “He is definitely the biggest one I have ever seen,” says Dr. Heather Barron, Medical & Research Director at CROW, which admits between 60 and 75 gopher tortoise patients each year, mostly due to encounters with vehicles on roadways. “His body condition is really poor right now, so he’s quite thin compared to a healthy tortoise. A healthy weight for him would be even higher.”

Although a tortoise’s size does not correlate directly to its age, Dr. Barron estimates the tortoise to be at least 50 years of age, possibly older. He was likely able to reach such a size, in part, due to the protected habitat where he resides within the state park. Gopher tortoises are listed as a threatened species in the state of Florida, with habitat destruction and fragmentation being a major factor that contributes to their vulnerability. 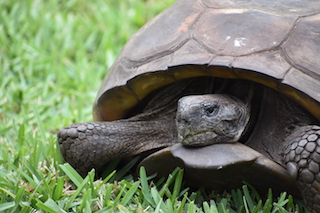 About Clinic for the Rehabilitation of Wildlife (CROW)

Established in 1968, the Clinic for the Rehabilitation of Wildlife (CROW) is a teaching hospital saving the sick, injured and orphaned native and migratory wildlife of Southwest Florida and beyond.  Through state-of-the-art veterinary care, public education programs and an engaging visitor center, CROW works to improve the health of the environment, humans and our animals through wildlife medicine. For more information, or to plan your visit, go to www.crowclinic.org. If you find an animal that is in need of help, call (239) 472-3644 ext. #222.

From left to right: Irwin, a Florida box turtle and CROW Education Animal, another gopher tortoise patient receiving care in the hospital and the potentially record-size tortoise patient.