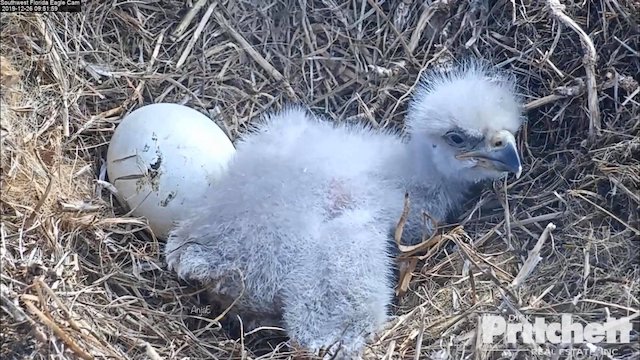 The liver tissue of E14 from the Southwest Florida Eagle Cam nest, a male eaglet, was found to contain markedly increased levels of brodifacoum, a type of anticoagulant rodenticide or rat poison.
​Anticoagulant rodenticides, or rat poisons, prevent the blood from clotting normally and cause an animal that has ingested a toxic amount to bleed to death. Rodents that ingest the poison often become disoriented or lethargic as they are dying and become easy prey for eagles, hawks, owls and other predators, passing the poison through the food chain. Sadly, it is not uncommon for apparently healthy raptors to test positive for low levels of rodenticides, which have not yet reached the point of causing toxicity and illness. The adults in the nest likely have chronic exposure to rodenticides from the same food sources, but are not currently suffering any ill effects due to their larger body size compared to the affected baby.
For more information on anticoagulant rodenticides, please check out the following articles:
Audubon Magazine: Poisons Used to Kill Rodents Have Safer Alternatives
Cornell Lab of Ornithology: Raptors and Rat Poison
For downloadable content to share with your friends, in your neighborhood, or classroom, click the link below.
Raptors Are The Solution (RATS): Outreach Materials