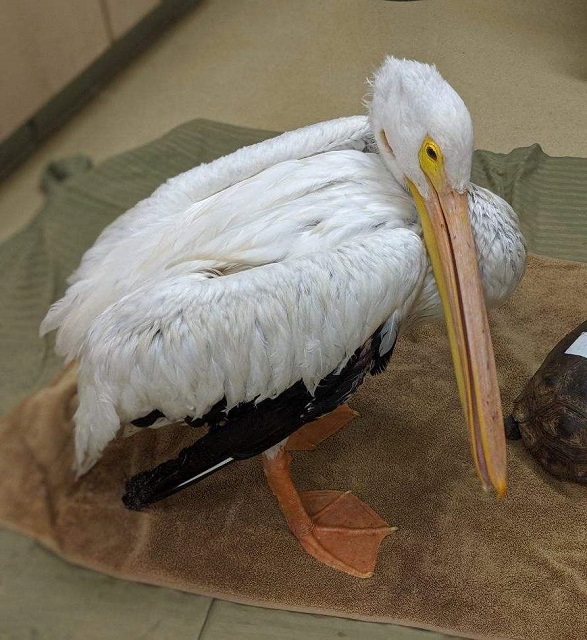 Known as one of largest North American birds, the American white pelican (Pelecanus erythrorhynchos) is a different animal when it comes to using its feet compared to its wings. On land, the snow-white water bird is an awkward walker – though surprisingly quick in its gait. But in the air, it is referred to as a majestic flyer, soaring gracefully due to large, stable wings.

At CROW, an adult American white pelican was admitted from Sanibel. The pelican was entangled in monofilament fishing line and reported to CROW officials by a caring citizen, then rescued by a CROW volunteer using a kayak.

When the pelican arrived to the hospital, veterinarians found that it had a fishing hook through the tip of its lower bill with monofilament fishing line attached that was wrapped around its right leg and right wing. Veterinarians removed the hook and line, but the pelican had sustained injuries from the line including a small laceration on its right pectoral and its right wing that they sutured closed.

“There is a strong possibility that if the injury heals inappropriately, the pelican may not be able to fly,” stated Dr. Megan Cabot, CROW veterinary intern.

Blood tests showed a high white blood cell count indicating a possible infection, so the pelican was started on antibiotics. “Bloodwork will be rechecked in a few days to ensure that the infection is under control,” said Dr. Cabot.

After a couple days in the hospital, an area of the wing – referred to as the patagium -- developed scabbing where the line had rubbed. This required wound care to keep the area moist. The patient was also in need of physical therapy to maintain range of motion in the wing, so as not to affect the pelican’s ability to fly.

“The wound is being kept moist and bandaged to avoid drying of the patagial ligament underneath, as this ligament is extremely important and must be intact for pelicans to fly. However, the tissue that was rubbed by the line is unhealthy at the wound site,” said Dr. Cabot. “Luckily, the pelican has maintained full range of motion despite the wound, however range of motion may decrease as the wound continues to heal and scar down.”

CROW officials were scheduled to debride the unhealthy tissue over the patagium and hopefully close the wound to speed up the healing process. Dr. Cabot called it “a tricky procedure because pelicans are notoriously sensitive to anesthesia, and the wound is right over the very important patagial ligament which must be protected.”

Unfortunately, CROW officials found that the tendon was severely damaged and unable to be repaired. Sadly, the pelican was euthanized. Incidents such as this one can be avoided. Monofilament line and hooks discarded or left by careless fishermen can entangle, choke, snag and even kill birds and other animals.

“Fishing line left in the environment causes unnecessary trauma and suffering in wildlife, and even minor wounds can be fatal if they affect the animal’s ability to do its natural behaviors like flying,” said Dr. Cabot. “It is extremely important that all line from fishing or any activity is collected and removed from the environment and disposed of in appropriate receptacles such as the monofilament recycling stations placed in strategic locations on Sanibel and surrounding beaches by the Mind Your Line initiative. Make sure no line is left behind and you will most definitely save a life.”