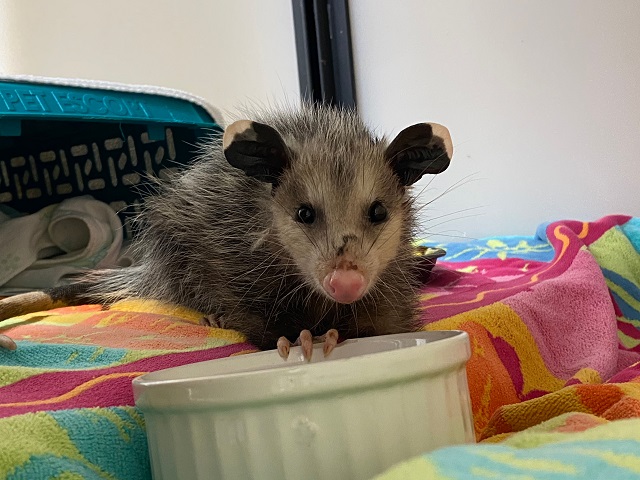 While there are several dozen different species of opossums in North America, the Virginia opossum (Didelphis virginiana) is the most notable. It is the only marsupial (pouched mammal) found north of Mexico and the only member of the genus that stores body fat.

Virginia opossums have long heads and pointed snouts, rounded furless ears, and a scaly, nearly hairless, prehensile tail – the ability to grasp or hold objects – that is about half of their total body length.

Sporting 50 teeth, opossums eat almost anything, from insects to road kill, with interest in fruit, eggs, birds, reptiles, amphibians, and small mammals also in play. They also prey on snakes, including poisonous ones, and are known to be immune to snake venom.

If cornered and unable to escape, a Virginia opossum may subject itself to becoming catatonic as a defensive measure. This allows the mammal to appear to be unconscious or dead – though most of its body functions remain normal – thus symbolizing the phrase “playing ‘possum.”

At CROW, a juvenile Virginia opossum was admitted after it was found covered in oil and lethargic. Upon initial examination, the patient was noted to be severely dehydrated and covered with oil and dirt. The opossum was given a bath using Dawn dish soap to remove the oil, then blow dried to dry its fur.

“We don’t know how she became covered in oil. It is possible it’s from a car. We have no other information about her other than she was found in Fort Myers covered in oil and seemingly lethargic,” said Dr. Sasha Troiano, CROW veterinary intern. “Dawn dish soap is very effective at cleaning oil off of animals. It is the detergent of choice for removing oil.”

The patient is being monitored closely and is receiving supportive care that includes antibiotics and food.

“The patient is being fed a variety of food, as opossums are omnivores. Currently, she seems to like soft cat or dog food, and she is also being offered a variety of fruits and vegetables and small fish pieces,” said Dr. Troiano. “She is being treated with antibiotics and GI (gastrointestinal) protectants.”

Apparently, the opossum was admitted with no major injuries but is on  a deworming medication.

“The patient is very skinny, and had a lot of gastrointestinal parasites based on a fecal examination,” said Dr. Troiano. “She is being dewormed, and supported with subcutaneous fluids as needed, antibiotics and nutrition. She is eating some on her own, but does not have the best appetite at this time. She will continue to receive supportive care.”

The deworming process is a regular medical procedure with this type of animal.

“We generally see opossums come in with a high parasite burden, especially if they are debilitated,” said Dr. Troiano. “The parasites are almost never the reason they are in the hospital, but they can become a problem in animals that are sick for other reasons, which is why we treat these parasites.”

The young Virginia opossum has been at the clinic for just over a week, but will need more time to fatten up, according to Dr. Troiano.

“The patient is continuing to receive supportive care, and the oil has been cleaned off of her fur,” she said. “She is still skinny, so she will need to be with us until she is in a better body condition prior to considering release.”