The Swainson’s thrush (Catharus ustulatus) is a medium-sized bird that lives on the ground and feeds on insects, other invertebrates and fruit. These slim songbirds have round heads and short, straight bills.

These symptoms are most likely a result of flying into something, like a window,” said Morgan Hester, CROW wildlife rehabilitator. “The eye swelling cleared up within a few days with the help of eye drops and pain medications.”

While the patient passed a flight test, it was still uncoordinated. 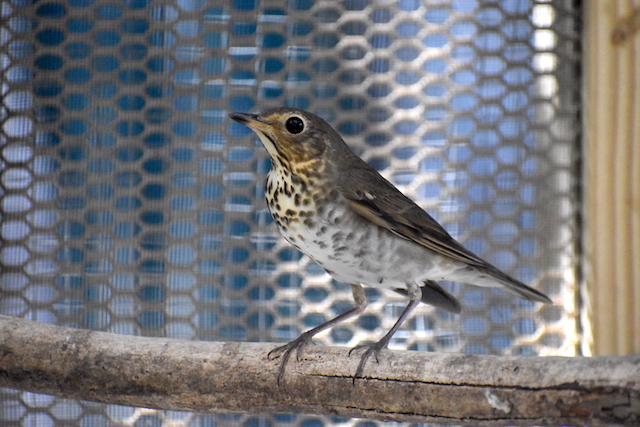 “The patient was standing and able to perch after a few days, so the staff felt it was time to flight test,” said Hester. “Upon the first flight test, the patient ‘failed’ in the sense of being uncoordinated and not strong enough to sustain flight. The slight wing droop could have been a lingering side effect of the head trauma or even something like muscle soreness from the injury.”

While the patient was able to lift well in flight, CROW staff did not feel confident yet in a total recovery. Six days after admittance, the patient was ready to flight test again, however, the Swainson’s thrush had already missed the southward migration period. The decision was made to overwinter the patient until April 2021 when it could rejoin the migration flocks heading northward.

“We have to consider environmental temperature, if there are others of its species still around, if the patient is strong enough to fly any distance alone, if the patient is at a good migration weight and much more,” explained Hester. “Based on all the above questions, CROW’s rehab team felt, to better the patient’s chance of survival after such significant trauma, the best thing was to overwinter until the species returns to Florida for spring migration.

“In Southwest Florida, we see many migrating birds that stop through Sanibel on the way to their wintering grounds which are typically in Central and South America. The Swainson’s thrush is one that winters in such places and migrates in large colonies. In Southwest Florida, we only see this species of thrush as it passes through from September to October and again in April or May. Because these birds travel such vast distances to reach their wintering ground, there is a lot to consider before release.”The patient’s slight wing droop was reported to be improving. It is doing well overall and regaining strength. The Swainson’s thrush will remain at CROW for a few more months.

“Missing migration means the patient will remain at CROW all winter and hopefully be released into a colony as they pass through on their northern migration,” said Hester. “At this time, the patient is being housed in both an outdoor spacious enclosure for sun time and flight conditioning when the weather is appropriate, but also an indoor enclosure to get the patient safely out of the cold. The patient is fattening up to migration weight, so come April, the patient will be ready to fly off and rejoin the species group.”