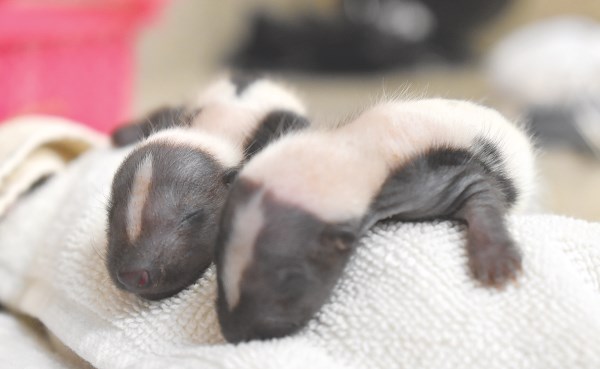 The striped skunk (Mephitis mephitis) is a medium-sized mammal with a glossy black coat, a thin, white stripe between its eyes and two stripes on its back. Skunk babies are blind and deaf when they are born.

At CROW, two newborn striped skunk siblings were admitted after being found outside of their burrow in Cape Coral. Finders reported not seeing the mother for over two days. Upon examination, the skunks were dehydrated and thin.

“The skunks are currently a little over 2 weeks old and are growing very quickly,” said CROW Rehabilitation Manager Breanna Frankel. “With them being so young, they can’t regulate their body temperature yet, so they are living in a temperature-regulated incubator. We are currently providing them milk formula six times a day, and they require stimulation as they can’t go to the bathroom on their own. We are monitoring their hydration and health status daily and providing any additional care that may arise.”

Veterinarians suspect the baby skunks were orphaned. Frankel stated the most common cause of babies being orphaned is their mother passing away, and acknowledged the finder was correct in bringing the skunks to the clinic. If someone is unsure in considering if an animal should be left alone or not, they can always call CROW or send photos so that medical staff can determine a potential patient’s health status.

“They were found right outside a burrow, which was likely theirs but they were too small to move themselves out of the burrow,” Frankel said. “The finder spent quite a while playing baby skunk sounds and trying to locate mom but was unsuccessful. With no evidence of mom coming back and with the infants being dehydrated and thin, it became obvious they had been without care for a period of time.”

The two baby skunks will remain in CROW’s care until they are old enough to be released. That process may take time to assure that the patients are ready to go it alone in the wild.

“These skunks will likely wean off milk by 7 to 8 weeks old and move to an outdoor enclosure soon after that,” said Frankel. “At this point, they will be fully eating on their own, but it will take several months after that for them to learn adequate survival skills before they can be released.”

Until then, the youthful skunks may be undergoing various diet changes under a watchful eye.

“They have a specific milk formula that provides necessary nutrients as they grow. Their eyes are still currently closed and they will continue on milk only until their eyes open,” said Frankel. “Once their eyes open, we will start to offer a slurry diet of milk formula and soaked chow to help acclimate them to eating on their own. Their dietary needs may change day to day, so they are under careful observation.”

When the siblings have matured and are ready to be released, careful consideration will again be taken in determining habitat.

“Typically, we like to release animals where they are found, but each situation is different,” said Frankel. “When we get to that point, we may decide to release them at a different location, on ideal habitat for their species, if we determine their original location was not safe or suitable.”