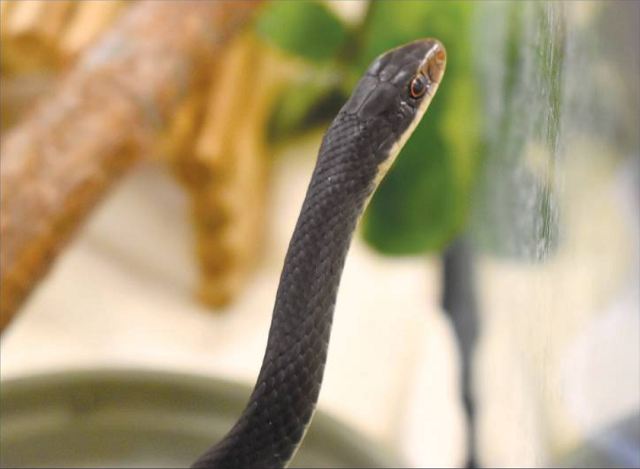 The southern black racer (Coluber constrictor Priapus) is a non-venomous snake that is mainly black in color except for a white chin. That light-colored chin often confuses people who think the snake may be a dangerous cottonmouth, but racers are more docile to the garter snake, indigo snake or the rat snake.

Black racers may come from the constrictor family but, unlike the boa constrictor, it is less ominous and less likely to subdue prey by squeezing them to death. They prefer to attack frogs, lizards, rodents and other small mammals, and crush them into the ground before dining on them.

However, keep in mind that they are snakes. While they may decide to “race” away and are quick as their name implies, they will attack if cornered and are not afraid to charge at people to frighten them or strike time and again with extreme force to defend themselves.

At CROW, a black racer was admitted after being attacked by a cat in Cape Coral. On exam, the snake was alert and responsive. It reportedly appeared healthy and stable with only a minor puncture wound about halfway down the body. The wound did not seem to be causing it any pain.

The patient is being monitored over the next few days for developing signs of infection. “Snakes are stoic but can show subtle signs of illness such as decreased appetite and energy. In severe cases they may develop skin lesions that suggest systemic infection,” said Dr. Cabot.

After roughly six days at the clinic this black race appears to be getting healthier and may be released if the prognosis continues to be positive. “The black racer is doing well in the hospital and if the wound continues to heal and the snake is still bright and active after a round of antibiotics, it will be cleared for release,” said Dr. Cabot.

The cat that attacked the black racer was reportedly a domestic cat that is probably used to living indoors. However, all cats do share the same instincts.“While feral cats pose the biggest threat to wildlife, all domestic cats will hunt prey if released outdoors,” said Dr. Cabot. “Cats that live or are allowed outside also exposed to dangers such as being hit by car, being attacked by larger wild animal and many diseases. Keeping domestic cats indoors can help keep wildlife and your cat safe.”