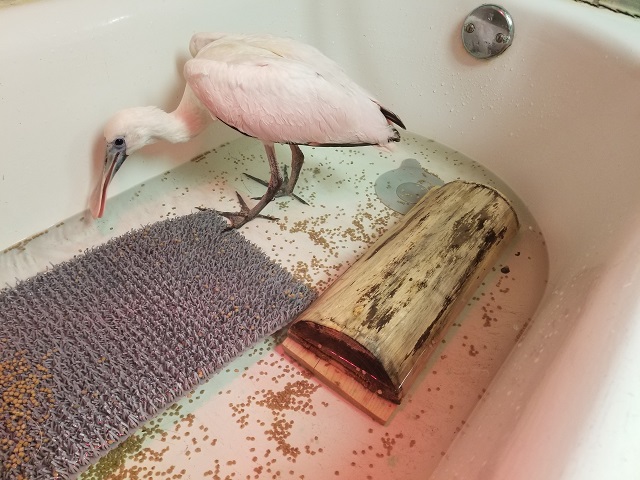 The roseate spoonbill (Platalea ajaja) is a sight to behold. From its rosy pink feathering to its platypus-like bill, this wading bird can be called majestic and bizarre in the same sentence.

Roseate spoonbills are the only species of spoonbill found in the U.S. The other five varieties – Eurasian, royal, African, black-faced and yellow-billed – take up residence in Asia, Africa, Europe and Australia.

Baby spoonbills do not immediately inherit their spoon-shaped bills. The bill begins to flatten in chicks roughly just over a week after hatching. By day 16, the bill begins to resemble a spoon shape and, by day 40, it usually grows to full size.

These bills come in handy when foraging for food. Roseate spoonbills sweep their bills in shallow water to feel for prey.

Juvenile roseate spoonbills differ from adults in color and head cover. Younger spoonbills are a paler pink color and have fully feathered heads, compared to adults that sport rose-colored bodies and bare heads.

At CROW, a juvenile roseate spoonbill was admitted from Bonita Dog Beach in Bonita Springs. It was reported by the finder to possibly have sustained a broken leg. When it arrived at the clinic, the spoonbill was standing and did not have any evidence of a broken leg, but veterinarians did find that it had a keel fracture – a break in the sternum-like bone – during its exam. It was provided with anti-inflammatory and pain medications.

“In this case, we were able to treat this bird’s fracture with pain medications and strict cage rest,” said Dr. Robin Bast, CROW staff veterinarian. “No additional bandaging or surgery was required.”

The patient was first accommodated indoors and spent time in a bathtub to simulate its shallow water habitat.

“Shore and water birds get routine tub time as part of their daily treatments,” said Dr. Bast. “This encourages normal preening/grooming behavior, eating behavior, and often allows them to do their own physical therapy in the water.”

Nutrition was a big part of its care.

“Wading birds such as this one are fed a combination of insect-based and fish-based diet in a shallow tub, to closely mimic how they feed in the wild,” said Dr. Bast. “This spoonbill eats very well for us in a shallow tub or baby pool.”

After a week in care, the spoonbill was eating on its own, but it remained very stressed. It was moved to an outdoor enclosure to continue its recovery.

“Like many of our wild patients, stress level is reduced even further in an outdoor environment – less noise from people or perceived predators. Outdoor enclosures encourage more natural behaviors, and thus reduce stress,” said Dr. Bast. “The spoonbill (was moved to) a small outdoor enclosure to prevent excessive activity while the fractured keel heals. Soon, it will graduate to a larger enclosure where it can start to take short flights and work on building back muscle mass.”

The patient will need a few more weeks to be healed enough for release.

“This spoonbill is stable and progressing well with its treatment. Based on the nature of the fracture, we anticipate it will be with us for a minimum of four weeks to allow for sufficient healing,” said Dr. Bast. “Once it is flying strongly again, it will be cleared for release.”