The rosebreasted grosbeak (Pheucticus ludovicianus) is a migratory bird that flies south in the cooler months to such tropical regions as the Caribbean, South America and Central America. This songbird has a very different look when it comes to gender. While both male and female are stocky, medium-sized and possess a hefty triangular bill, the male is more striking in color with a darker backside and pinkish white markings on its wings and stomach area, and its distinctive namesake red breast. The female is browner and heavily streaked on its head, wings and underside, while sporting a white eyebrow and paler bill.
The grosbeak’s stout bills are handy for eating seeds, fruit and insects. You can often see this bird rummaging at your bird feeder. Although actually a member of the cardinal family, the rose-breasted grosbeak is often compared to a robin and has a similar song style, which has been known to signal the arrival of spring and warmer weather when it returns from its winter location. At CROW, an adult male rose-breasted grosbeak was admitted from Cape Coral after a cat attack. Upon physical examination, the patient was thin, pale and generally weak. No claw marks, bite marks or other apparent physical “cuts” were found on the bird. “No discrete wounds were identified, however, cat bites often cause small puncture wounds that can be difficult to find under feathers,” said Dr. Charlotte Cournoyer, CROW veterinary intern. 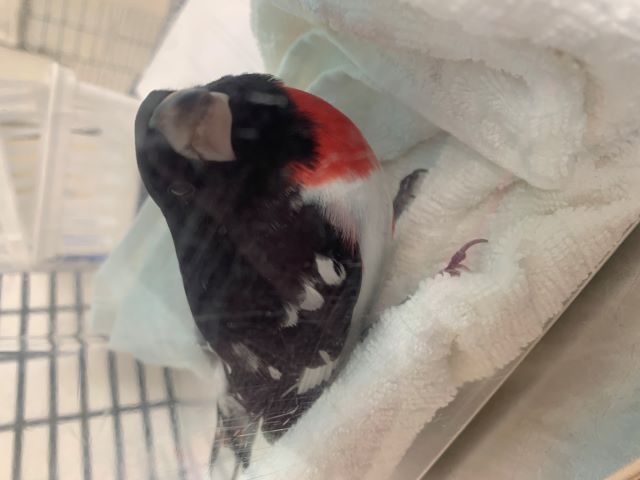 “These wounds are often small but deep, injecting bacteria into the tissues and leading to infection.” The patient did not require surgery or bandaging, but it was given a preventive antibiotic to fight any potential infection as cat’s carry a deadly bacteria in their mouths (Pasteurella multocida). A few days after the antibiotic was administered, the patient appears to be improving. “At this time, we believe the antibiotic therapy employed is working as the patient has not had any persistent signs of infection,” said Dr. Cournoyer. “Often, we treat with antibiotics for five to seven days for cat bites if there are no clinical signs of infection, or longer if clinical signs do not resolve.” The rose-breasted grosbeak was x-rayed after some time at the clinic, and the images revealed a bone break in one of its shoulders.
“Radiographs taken a few days after admit showed a right clavicle fracture, which is similar to the collar bone in people and important for flight,” said Dr. Cournoyer. “The patient is expected to make a full recovery but will require a prolonged stay in hospital to give this bone time to heal. This is treated with pain medications and cage rest.” During its cage rest, the patient will be monitored under supportive care until he is ready to be released. Rehabilitation and muscle buildup will also factor in. “The bird will likely start flight training after three to four weeks of cage rest for the clavicle fracture. Flight training will commence once the fracture is fully healed and will last anywhere from a few days to a couple weeks,” said Dr. Cournoyer. “The patient is responding well to therapy and expected to make a full recovery but will require a prolonged stay in hospital due to the new finding of the clavicle fracture.” 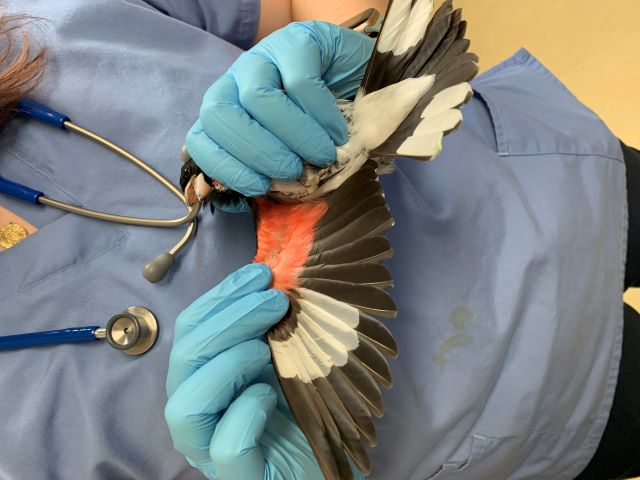