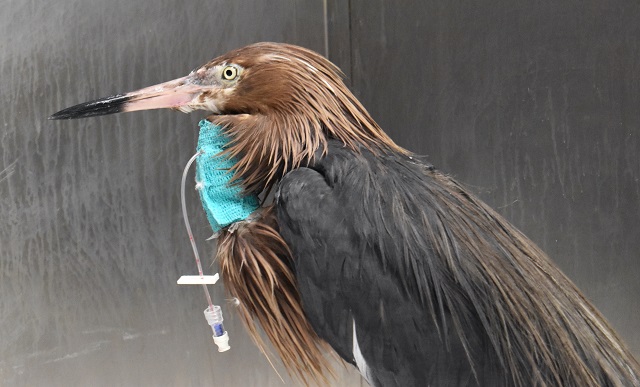 A reddish egret (Egretta rufescens) is an odd character. It is referred to as a medium to large heron with long legs and long neck. Adults mainly have a pinkish color at the base of their bills with a blackish tip. They are so-called due to their reddish neck to contrast the grayish color on the rest of their bodies. However, and stangely, they are white reddish egrets.

Reddish egrets are known for their peculiar behavior when looking for fish. They like to take long strides through shallow water and may leap at any point or stagger sideways while raising a wing or wings before taking a stab at their next meal. However, at times, these egrets can be less flamboyant when feeding.

At CROW, an adult reddish egret was rescued along Wildlife Drive in the JN 'Ding' Darling National Wildlife Refuge on Sanibel. Upon being admitted to the wildlife hospital, veterinarians assessed the bird and noted it to have moderate ataxia - abnormal walking - and mild head tremors. The bird was able to stand but preferred to sit down on its hocks. All of these symptoms were consistent with brevetoxicosis, or red tide poisoning.

With red tide returning to area waters at this time of year, CROW officials have seen an influx of patients with the same symptoms. "Yes, we have been admitting many seabirds with neurologic signs consistent with red-tide poisoning or brevetoxicosis," said Dr. Robin Bast, CROW's staff veterinarian, when asked about patient intake.

An intravaneous catheter was placed in the reddish egret's jugular to administer fluids and an intravaneous lipid emulsion (ILE) therapy, which has previously been used by CROW to treat red tide in double-crested cormorants and sea turtles as part of its ongoing research.

"Fluid therapy is a key component in treating this toxin," said Dr. Bast. "We give a fat solution called ILE through the vein which binds the toxin in the bloodstream and helps the patients recover faster. That treatment is followed by additional fluids through the vein to help support the kidneys as the toxin is processed and eliminated from the body."

"This treatment has been used in people as well as dogs and cats for any toxin that is 'fat soluble', or that binds easily to other fats. This treatment has not been documented in the literature as a treatment for red tide poisioning, but we investigated it during last year's bloom and found that it has increased our success rate to 85 percent for seabirds being treated for brevetoxicosis.

The patient is one of five reddish egrets that were outfitted with satellite tracking devices as part of a study by the Avian Research and Conservation Institute at the JN "Ding" Darling National Wildlife Refuge that began in 2014 to learn more about seasonal movements, year-round habitat use, home range sizes and survival. All five reportedly survived Hurricane Irma.

Many seabirds are affected by red tide, which tends to be more prevalent in the fall and winter months as warmer waters can be congenial to algal growth. Cormorants are an indicator species for this type of poisoning.

"Cormorants tend to be commonly affected by this toxin and during active blooms, can be seen acting 'drunk' on the beach, struggling to stand and unable to fly. Other seabirds affected include pelicans, gulls and terns, and herons and egrets," said Dr. Bast. "During an active bloom, our ICU is typically filled with affected cormorants."

As for the reddish egret patient, problems assoicated with brevetoxicosis were too much for it to handle.

"Unfortunately, this reddish egret developed complications from renal failure including stones in the cloaca called cloacliths," added Dr. Bast. "Despite intensive treatment, this egret passed away from its illness."