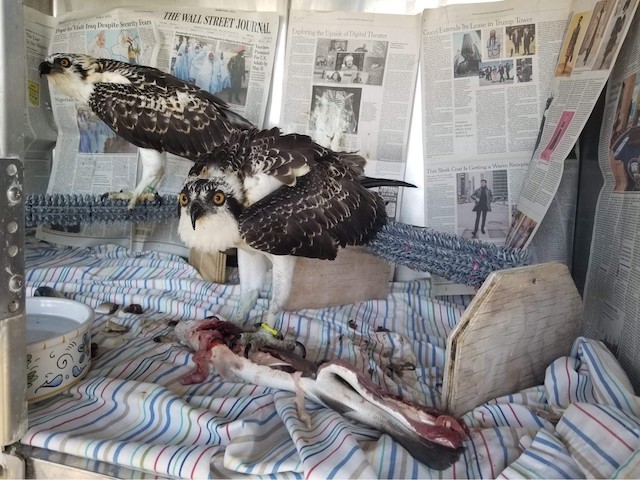 The osprey (Pandion haliaetus) is a fish-loving hawk that can be found along coastlines, bridges and stick nests on poles and channel markers. They are visible above water, carrying their prey within the barbed pads on the soles of their feet.

At CROW, a juvenile osprey was found in Fort Myers unable to fly. Upon admittance on May 16, the patient was examined and flight tested. The osprey failed the flight test and radiographs revealed a right wing coracoid fracture. The patient was placed in a body wrap to stabilize the break, and it received physical therapy every three days. Eight days later, hospital staff reported the patient not eating well on its own. On May 24, a second juvenile osprey was admitted from Cape Coral after it was found unable to move. Upon initial examination, the osprey was thin, and radiographs revealed it also had a right wing coracoid fracture. It was given the same treatments as the first osprey.

“Typically for coracoid fractures, within the shoulder girdle in birds, a supportive body wrap is placed for about two weeks, followed by one week of cage rest,” said Dr. Robin Bast, CROW staff veterinarian. “If a wrap is placed, it must be removed every three days so that physical therapy can be performed. This means extending the wing to ensure that normal range of motion is still occurring at all joints, and to prevent contracture of the patagial membrane -- essential for flight – which can happen if it isn’t stretched on a regular basis.”

The two patients had no problem sharing space together.

“These osprey cohabitate in their enclosure with no problem. Anytime we introduce patients into the same enclosure, we keep in mind their species and natural history. Do they spend time with a group in the wild? Are they typically territorial? We also monitor their behavior closely when we first introduce them in the same enclosure,” said Dr. Bast.

Florida Fish and Wildlife Conservation Commission (FWC) officers donated a large fish, an illegal catch confiscated from an angler. The fish was given to the osprey pair, and the one who had not been eating reportedly tore right into it.

“We offer osprey patients finger mullet, herring or large mullet. It is challenging to get osprey to eat in captivity, since we cannot mimic how they eat in the wild, said Dr. Bast. “We get donations from FWC whenever they confiscate illegal catches, so the fish don’t go to waste. We truly appreciate this collaboration and our patients do too.”

Both the ospreys remained on strict cage rest while continuing to receive physical therapy. If all goes well, the recovery game plan will require outdoor time.

“After three weeks indoors, the osprey will be moved to a small outdoor enclosure to start building back the flight muscles that have weakened while they were on cage rest,” said Dr. Bast. “After one to two weeks in a small outdoor enclosure, they will be moved to a larger flight enclosure to practice flying again as the bone should be healed by that time.”

Sure enough, the young osprey that was admitted first improved to the point that it was allowed to go to what CROW staff calls “day camp.” The patient’s roommate shouldn’t be too far along in getting fresh air as well.