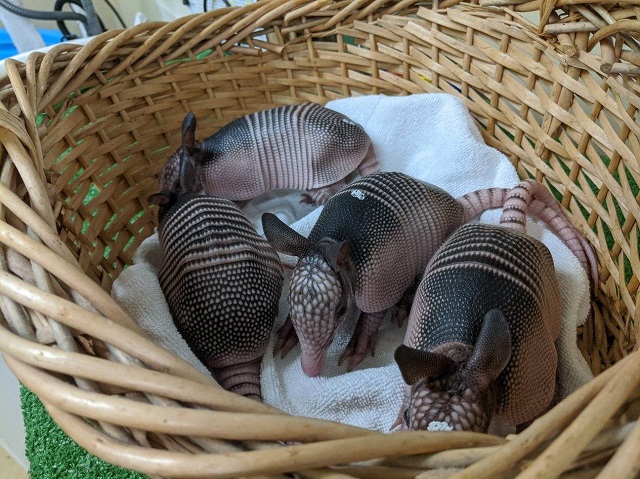 A nine-banded armadillo (Dasypus novemcinctus), the most common of armadillos, has nine armor-like plates covering its body. It may have more bands, but they are not as visible.

At CROW, four infant, male ninebanded armadillos were observed without their mother in North Fort Myers over a few days in early May. On May 5, three of the siblings were admitted to CROW. The following day, the fourth was captured and reunited with his brothers at the clinic. All four babies were dehydrated and emaciated, but did not have any injuries. They were provided with fluids and started on a re-feeding plan.

“Most of the infants we admit are too young to survive on their own. They usually come in alone or with one sibling, but this group got lucky and ended up all together,” said CROW Rehabilitation Manager Breanna Frankel. “(Armadillo babies should be admitted) if they look thin, are acting lethargic, or if there’s an obvious injury and they require further assistance. The majority of infants we admit aren’t injured at all, just struggling to survive at such a young age. By calling our hospital when you find any young animals, we can have them send us pictures and we will determine age, development and health status. This helps eliminates bringing patients to the hospital that don’t require assistance.” 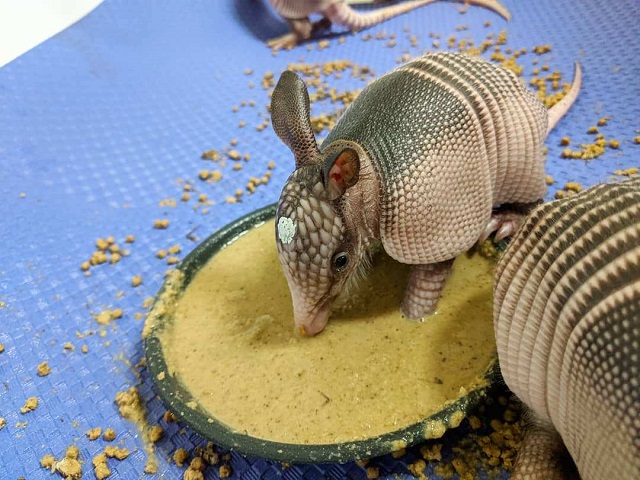 Due to the patients’ young age, their diet consisted of milk that was fed using tube feeds three times a day. As they began to grow, rehab staff transitioned them to a slurry of insectivore and gradually onto whole insects. Since admission, the armadillos have gained almost 200 grams of weight and have become active.

“As with all wild animals, we use a milk formula specific for each animal’s need. There are various formulas and combinations of formulas used among wildlife rehabbers to ensure the appropriate success,” said Frankel. “There is more to feeding infant wildlife than offering a cup of warm milk. Wildlife should not be offered milk that wasn’t meant for them such as goat’s milk, cow’s milk, or human milk, as they can’t digest it appropriately, and it actually leads to further issues. We encourage finders to not feed a baby animal themselves, but to bring it to a local wildlife hospital to prevent further illness or injury.

“After five days in care, we started to offer them a slurry diet in a dish with soaked insectivore chow, but they didn’t start eating it for about two days. At that point, they weren’t eating enough to gain weight off it so they continued with milk feeds. We would put them in a dry bathtub on a mat a few times a day and offer the slurry and soaked chow so they could mash it and lick it up. At this point, we also started offering soft insects with their food a couple times a day. After nine days in care, they were fully weaned off milk and eating enough slurry, chow and insects to successfully gain weight on their own.”

On May 21, the four brothers were able to begin outdoor recess in which they were monitored by a staff member in an outdoor pen to practice digging and foraging skills. They will continue to receive supportive care until they are old enough for release back to the wild.

“Once they reach a certain size, they will be ready for release,” said Frankel. “While their digging skills solidify very early on in life, we keep them until a certain size to ensure they have a higher chance for successful release. Being a little bigger means they are less likely to become prey for another animal and will have mastered other skills at the clinic.”

The young armadillos will be returned to the area in which they were found.

“Regardless of what happened to the mother, these quadruplets were without her for a long enough time that they almost didn’t make it themselves, so we are very pleased to see how much they have improved,” said Frankel. “The release will likely not reunite them with their mother, but at that point they will be self-sufficient and have no need for her care.”