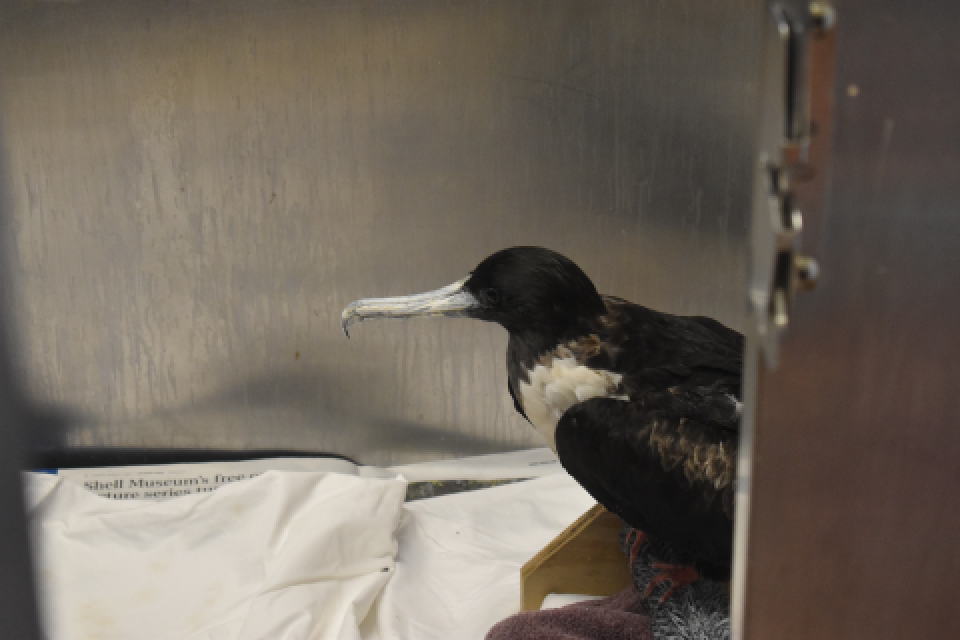 The magnificent frigatebird (Fregata magnificens) is so named due to its effortless flight or floating style that is truly a thing to watch. Its smooth maneuver in the air is due to its deeply forked, pterodactyllike tail for steering.

At CROW, an adult female magnificent frigatebird was found thrashing in the water and suspected to have been entangled in fishing line. Upon physical examination, hospital staff noted a thin body condition and dehydration.

“It’s certainly possible that long-term entanglement could have caused her thin body condition and dehydration,” said Dr. Kristie Schott, CROW veterinary intern. “However, this bird’s finder reported that she was struggling in water ‘as though tangled in fishing line,’ so it’s actually possible that she was never entangled and simply crash-landed in the water then couldn’t get out because frigatebirds’ feathers aren’t waterproofed. In that scenario, her weight loss and dehydration would most likely have resulted from an underlying illness.”

Medical staff also noted the patient had “harsh breathing” and was administered antibiotics along with other supportive medications.

“Harsh breathing refers to the sounds we hear when listening to the lungs with a stethoscope,” said Dr. Schott. “In a healthy bird, the lungs should be silent even if they’re stressed. If we hear crackling or wheezing noises, that is a sign of respiratory disease such as pneumonia or fluid in the lungs.

“An animal struggling in water can easily inhale water or ‘aspirate,’ which often leads to development of aspiration pneumonia – infection in the lungs – and harsh lung sounds. She was given antibiotics to treat the suspected infection in her lungs. She was also treated with fluids to correct her dehydration, anti-fungal medication to prevent development of fungal infections – which this species is very susceptible to – and supportive feedings.”

The patient will continue to be closely monitored until she is ready to take the next steps in her rehabilitation process.

“We are currently monitoring her blood work, particularly the numbers and appearance of her white blood cells, to ensure that the infection has resolved before stopping treatment. We are also monitoring her weight and appetite to ensure that she returns to a good body condition,” said Dr. Schott. “She has been eating well when tong-fed, and gaining weight, so once her infection is resolved she’ll move to an outdoor enclosure to build up strength and muscle condition before being released. Since she’s still in the clinic being treated for her infection, we don’t have any release info yet.

“While this particular bird may not have been entangled, fishing gear entanglement injuries are one of the most common reasons animals need to be treated at CROW and a major contributor to the decline of seabird populations worldwide. Entanglement in line can prevent animals from eating, cut off blood flow to limbs, inflict wounds that lead to serious infections and cause injuries that lead to permanent loss of ability to fly. By ensuring that fishing hooks and monofilament line are packed away and properly disposed of, we can all do our part to prevent suffering and protect our local wildlife. For more information on how you can help, visit the Mind Your Line project website at www.mindyourline.org.”