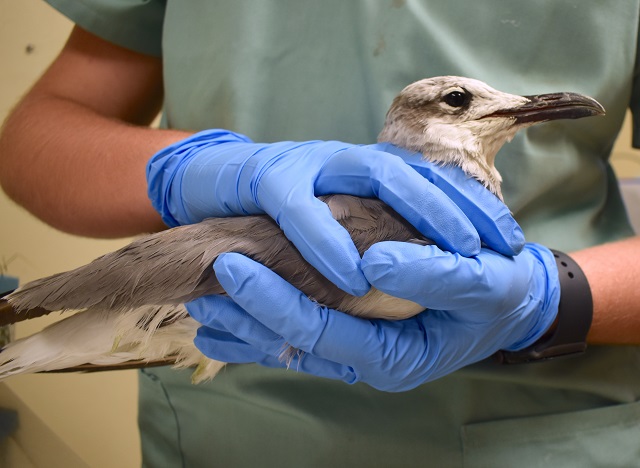 The laughing gull (Leucophaeus atricilla) is often called a bird of summer due to its fondness of beaches and its distinct, nasalized call that one would hear if sitting on a beachfront in the northeast.

The handsome gull usually sports a white underbelly to go with a light gray wing color and a dark-colored head. In winter, the color of its head becomes more grayish. The coastal bird dines on practically anything and can be found in parking lots, fields or garbage dump areas when not on the shoreline.

The nest-building duties usually fall on both the male and female laughing gull. If a male cannot find a mate, he will sometimes begin building a nest platform to attract a female.

Laughing gulls faced extinction in the late 19th century when egg and plume hunters raided their nests. Wildlife protection has helped the populations of laughing gulls to increase over the last century.

At CROW, an adult laughing gull was found down on the beach at Lover’s Key State Park with an appearance that it could not fly. After being admitted to the wildlife hospital, veterinarians performed an exam and found that the gull was emaciated and had a dislocated left shoulder.

Veterinarians noted that the dislocation was easily reduced or put back in place. The gull was placed in body wrap, provided with pain medication and started on a re-feeding plan for its poor body condition.

“The humerus was popped back into the shoulder joint while the patient was under anesthesia, and held in place with a supportive body wrap bandage,” said Dr. Bast. “The patient was placed in a body wrap for one week and then stabilization was reassessed. The wrap was removed, and it was cage rested for another week before being moved to an outdoor enclosure.”

The re-feeding program began with a liquid diet and increased to solid foods. “We start with liquid formulas that are easier to digest – LaFeber’s Piscivore Care and Mazuri’s Fish Analog – before transitioning to whole food items,” said Dr. Bast, “in this gull’s case, small fish called smelt.”

Bloodwork for the gull also showed it was anemic which veterinarians noted to be likely caused by its emaciated state.

“The gull’s anemia is likely related to being thin and not related to blood loss,” said Dr. Bast. “It received injections of iron and vitamin B12 initially, and the nutritional support plan will also help improve these bloodwork results over time.”

The patient has recovered nicely and is currently undergoing rehabilitation towards a release.

“The gull had a week of cage rest after the wrap was removed, but it is now in an outdoor enclosure doing its own physical therapy and taking short flights to regain its strength back after the injury,” added Dr. Bast. “This gull was moved outside recently so it can do its own physical therapy. It may be a week or two before it is flying strongly enough to be considered for release.”