The Kemp’s ridley sea turtle (Lepidochelys kempii) is the smallest marine turtle in the world, weighing in at an average of 100 pounds and just over three feet in length. That is a far cry from the largest living sea turtle, the leatherback, averaging six feet, 1,275 pounds.

While it is primarily found in the Gulf of Mexico, the Kemp’s ridley is also active in the Atlantic Ocean from Key West to Nova Scotia. In fact, the sometimes-called Atlantic ridley sea turtle is named after Richard M. Kemp, a fisherman from Key West, who presented the species for identification in 1906. 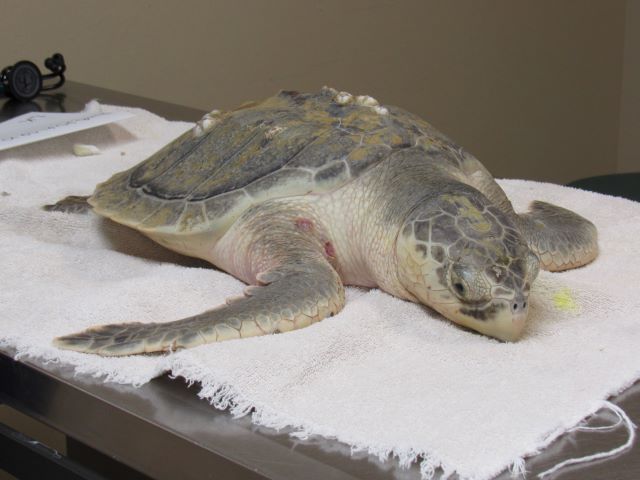 At CROW, a juvenile Kemp’s ridley sea turtle was admitted after being rescued by Florida Fish and Wildlife Conservation Commission (FWC) officers. The turtle was floating off Pine Island and was reported to have buoyancy issues which can be indicative of brevetoxicosis (red tide poisoning) or air in the GI (gastrointestial) tract. Sea turtles affected by red tide have not been as abundant as two years ago, when brevetoxicosis ran rampant in marine animals and birds.

“Last year, we only had one sea turtle with confirmed red tide poisoning and this year, we have had two suspected cases including this Kemp’s and currently we have a loggerhead in ICU (intensive care unit),” said Dr. Robin Bast, CROW staff veterinarian. “During the extensive bloom of 2018, we saw several dozen sea turtles with red tide poisoning over the course of a few months.”

Radiographs showed no abnormalities in the GI tract. Initially, the patient received intravenous lipid emulsion therapy, while barnacles were removed from its shell, flippers and mouth.

“Red tide poisoning is caused by brevetoxins, which are produced by a specific algae, Karenia brevis. This toxin binds to fats, or lipids. So we can give lipids directly into the bloodstream to help bind any toxin so it can then be eliminated from the body,” said Dr. Bast. “Intravenous lipid emulsion therapy or ILE is commonly used to treat humans, dogs and cats with other fat-soluble toxins. We have used this treatment successfully in birds and sea turtles affected by brevetoxins.”

The patient was placed in shallow water where it seemed neurological symptoms began to worsen.

“The toxin is processed by the liver and kidneys, and can cause damage that ultimately may result in organ failure in severe cases. Liver and kidney failure can result in neurologic symptoms,” said Dr. Bast. “Additionally, brevetoxins primarily affect the nervous system and can affect a patient’s sense of balance and coordination and, in severe cases, may even cause seizures.”

The patient continued to receive rehabilitative and supportive care.

“In addition to the ILE therapy, the Kemp’s received IV fluids to support the kidneys, and antibiotics,” added Dr. Bast. The Kemp’s ridley was monitored for neurologic improvements. Unfortunately, its health deteriorated.

“Despite intensive care, this patient’s neurologic signs worsened and the turtle went into respiratory arrest (and it) stopped breathing on its own,” said Dr. Bast. “Despite intensive resuscitation efforts including placing the turtle on a ventilator for 12 hours, the turtle did not survive. A necropsy or post-mortem examination will be performed according to FWC regulations.”