The gopher tortoise (Gopherus polyphemus) is a terrestrial turtle with stumpy, elephant-like hind feet and shovel-like forelimbs that work the ground. In fact, these land-based reptiles are so named due to their habit of digging large, deep burrows like the rodent of that name. At CROW, an adult female gopher tortoise was admitted from Sanibel after being hit by a car. The patient suffered from shell fractures and needed surgery to flush its wounds and bandage them. “Patient 949 suffered from a depression fracture, which is where a blunt force hits the top of the carapace and pushes fracture pieces into the coelomic cavity – often into the lungs,” said Dr. Laura Kellow, CROW veterinary intern. “Radiographs were performed to evaluate the extent of the injuries, since sometimes these fractures can cause irreparable damage, and the patient was stabilized prior to surgery with pain medications, fluids to help replace blood volume, and started on antibiotics.” Despite what appeared to be a delicate area to work on, the surgery was deemed a success. 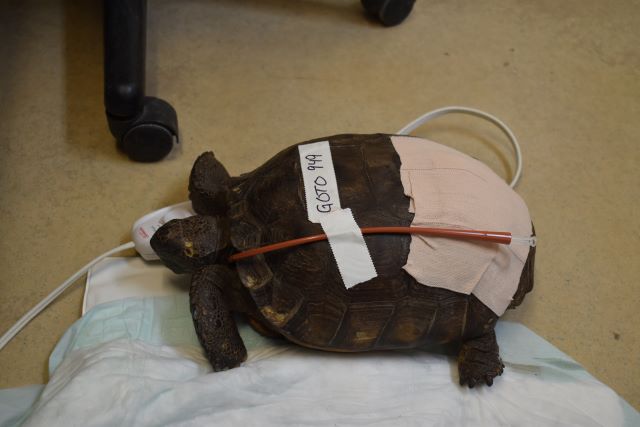 “For depression fractures, the goal of surgical stabilization is to bring all of the pieces up into normal alignment to allow for healing of the underlying tissues as well as the carapace. This involves administering strong pain and sedation medications and then placing the patient under general anesthesia,” said Dr. Kellow. “A sterile Dremel (tool) is used to smooth away edges of keratin of the carapace, and then sterile surgical instruments are used to gently move the fracture pieces up and back into alignment. Often the shell stays when lifted, but in this case, small pieces of foil tape were used to help stabilize the fracture and RediHeal, a product used to help promote healing, was used in the fracture defects.” Fortunately, there was no sign of major internal damage. 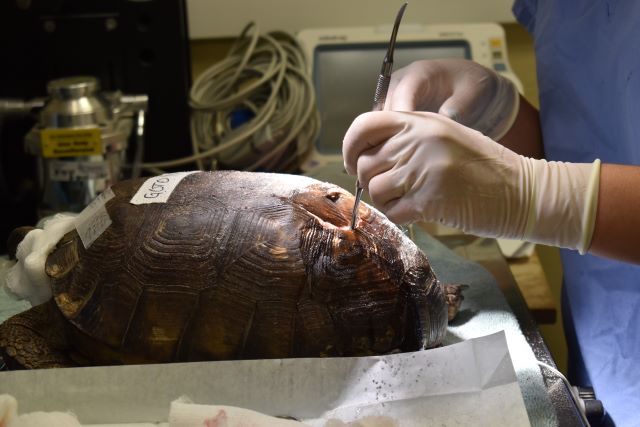 All depression fractures have some degree of internal damage since a tortoise’s shell is the keratin outer layer followed by their bone. When these patients arrive at the clinic, we assess their ability to walk since some fractures may involve or cross the spine,” said Dr. Kellow. “We also take radiographs to assess the degree of lung or other organ involvement. We do blood work to evaluate the amount of blood loss, as well as to look for evidence of infection. “Luckily, this patient’s fracture did not involve the spine, and the patient was walking well on admission.” The patient needed 35 days of continued care. “Post-operative care is just as important as surgery since infection is common in tortoises that suffer vehicle strikes, and these patients are often on antibiotics for weeks. 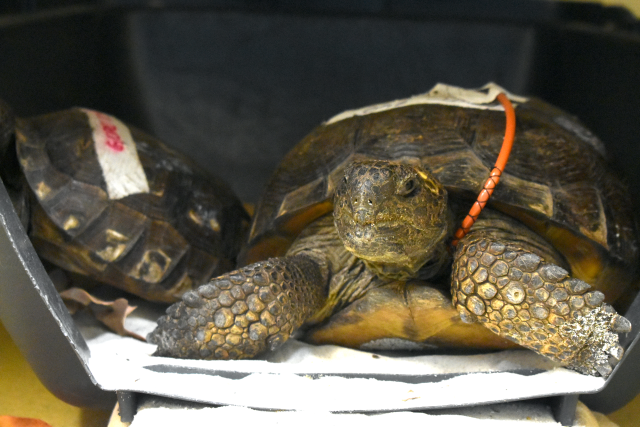 The patient also had a feeding tube placed during surgery to allow for assisted feedings and for oral pain medications, since these patients often don’t want to eat on their own right after surgery,” said Dr. Kellow. “Fracture repairs in mammals, including humans, take six to eight weeks to heal. (Patient) 949’s depression fracture stabilized really well after a month, and she was eating well after two weeks in care.” Not all gopher tortoises have such a favorable outcome after a vehicle strike, but this one did. “Patient 949 was released in a safe place near where she was found on Sanibel by the students who helped care for her during her time here,” said Dr. Kellow.