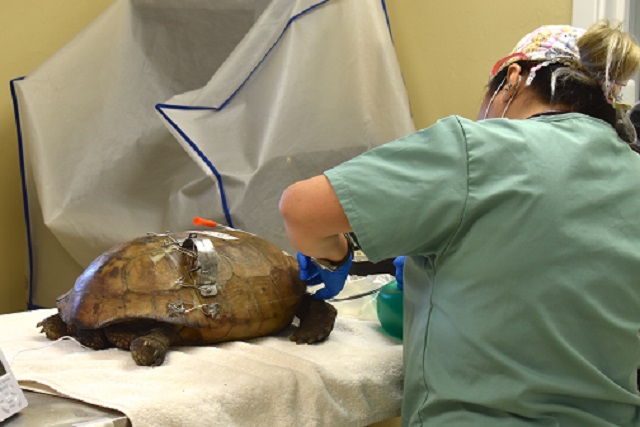 The gopher tortoise (Gopherus polyphemus) is one of five species of North American tortoise and the only one to be found naturally east of the Mississippi River. This terrestrial reptile is listed as a threatened species in Florida.

While sea turtles have flippers, gopher tortoises have feet – flattened, elephantlike hind feet and thick, scaly forelimbs that can dig burrows with shovel-like efficiency. In fact, the life of a gopher tortoise revolves around its burrow where it reportedly spends up to 80 percent of its time. Burrows also offer shelter from predators to burrowing owls, mice, indigo snakes, rabbits, gopher frogs and invertebrates.

Since these burrows are critical for the overall structure and function of an ecosystem, with a positive influence on the animals that make up that ecosystem, gopher tortoises are kindly regarded as a keystone species.

“Keystone species are defined as ‘a species on which other species in an ecosystem largely depend, such that if it were removed the ecosystem would change drastically.’ Gopher tortoises are a keystone species in that their burrows are widely utilized by other animals, diversifying habitat opportunities for local wildlife,” said Dr. Mariah Lancaster, CROW veterinary intern.

One can differentiate a male from a female by its shell. Adult males possess a concavity on their lower shell, while adult females will have a flat lower plastron.

At CROW, an adult female gopher tortoise was admitted from Cape Coral. The tortoise had several fractures which led staff to believe it had been hit by a car. The fractures, one running from the right side to the top of the shell, one running along the right side and a depression fracture where the two met, were heavily contaminated with dirt and debris. The wounds were flushed, cleaned and bandaged, and the tortoise was provided with pain medication.

“A depression fracture is when a piece of bone has broken away from the shell, but is still attached to the underlying tissues, which causes it to fall away from the upper shell and create a ‘depression,’” said Dr. Lancaster.

Surgery was performed to place screws, brackets and wire to hold the fractures together and raise the depression fracture so it could heal in place.“This depression fracture was elevated to meet the shell using a metal bar. The bar was hand-shaped to form a curved, handle shape above the fracture and was screwed onto the healthy shell,” said Dr. Lancaster. “The fragment was elevated by placing a central screw which was then tied to the bar.”

In all, the hardware used on the patient included one metal arch to elevate the depression fracture, one set of metal brackets and eight to 10 screws to wire the shell together.

“The assembly will be in place a minimum of four weeks, but with this level of displacement, we’ll likely be reassessing at one month,” said Dr. Lancaster. “Then, we may begin staged reduction – slow removal of the hardware – at about six to eight weeks to allow for more thorough shell healing.”

After more than two weeks at the clinic, the tortoise continues to receive wound care and bandage changes to help the fractures heal.“The patient is doing well, though the complexity of the fracture may require additional procedures in the coming days to weeks,” said Dr. Lancaster. “The depression fragment will need to be removed if it does not begin to heal to the healthy bone, and then the skin underneath will need to form scar tissue before the turtle will be ready for release.”