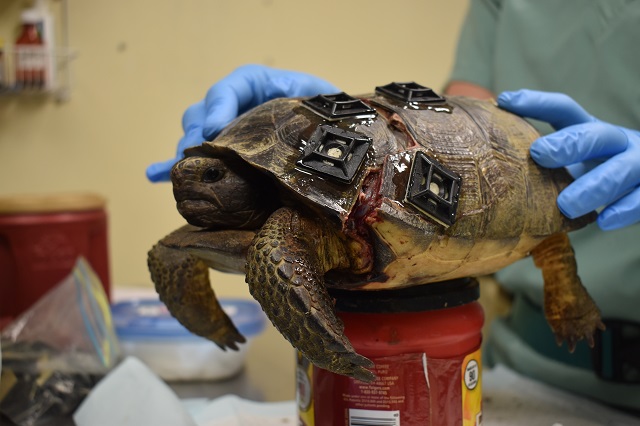 The gopher tortoise (Gopherus polyphemus) is a durable reptile with a long lifespan, though its species is listed as threatened in Florida. As its name suggests, it can dig like a gopher and does so to create deep burrows with its powerful forelimbs so that more than 300 species of animals have a place of shelter.

Luckily, the gopher tortoise and its home are both protected under state law. Before any land can be cleared or developed around its burrow site, property owners or builders must obtain permits from the Florida Fish and Wildlife Conservation Commission (FWC) before capturing and relocating tortoises. At CROW, an adult gopher tortoise was admitted from Cape Coral after being hit by a car. The tortoise suffered a large fracture to the front left side of its carapace – the upper part of its shell – and radiographs showed that it also suffered a fractured humerus of its left forelimb. The tortoise was given pain medication and the wounds were bandaged, including bandaging the fractured forelimb against its body to restrict movement. The bandaging was said to be the best practice at the time.

“It is important to ensure the patient is stable enough to undergo prolonged anesthesia required for a shell fracture repair. We stabilize them by assessing their bloodwork, giving fluid support and antibiotics, and doing wound management/bandaging to remove any dirt or contamination from the fracture site,” said Dr. Robin Bast, CROW staff veterinarian. “Tortoises usually tolerate bandaging well and, in this case, it is helping keep its broken arm stabilized, which helps decrease its pain in addition to the use of pain medications.”

Once the tortoise stabilized, veterinarians placed brackets on either side of the shell fracture so that zip ties could be used to reduce the fracture and hold it in place as it heals. “Brackets are able to be placed immediately upon intake, or shortly thereafter. These can be placed with the patient awake and during initial stabilization,” said Dr. Bast. “The fracture reduction – the process of re-aligning the fracture pieces – happens under heavy sedation or anesthesia, when we tighten the zip ties.”

CROW officials said the patient’s injured leg will remain bandaged for two weeks and then be reassessed for how it is healing. If it is not healing appropriately, surgical intervention may be warranted. “A patient should undergo surgery as soon as it is systemically stable, which typically occurs within a few days of admission to the hospital,” said Dr. Bast.

“The procedure for this tortoise also included freshening the edges of the fracture before re-aligning them so it has the best chance of healing.” Friday, October 4 marks the two-week period of rehabilitation for the gopher tortoise. Its extended stay will rely on its adaptability and mobility as well as its progress through physical therapy in the upcoming weeks. “This patient is adjusting to the challenge of mobility with its left arm bandaged into the shell. We have added a temporary support in the form of half a golf ball glued on the underside of the shell to provide extra support as it walks. It grazes well outside, and will have routine physical therapy on the arm as it heals,” added Dr. Bast. “The shell fracture will take at least four to six weeks to heal, so this patient still has a bit of time until a determination about release can be made.”