The downy woodpecker (Dryobates pubescens) is the smallest woodpecker in North America. Its tiny stature allows it to reach food that larger woodpeckers have trouble with, such as insects living on or in the stems of weeds, even with a short bill. Its color pattern involves black and white, usually in some form of checkered arrangement.

At CROW, a nestling downy woodpecker was admitted from Fort Myers after the dead tree that contained its nest was knocked down. The woodpecker suffered some bruising over its left leg, but was otherwise healthy. Its other two siblings did not survive the fall.

Many times, babies – particularly cavity nesters like this – can be re-nested using a nest box, but since the bruising associated with the fall must be closely monitored, this nestling will remain at CROW. 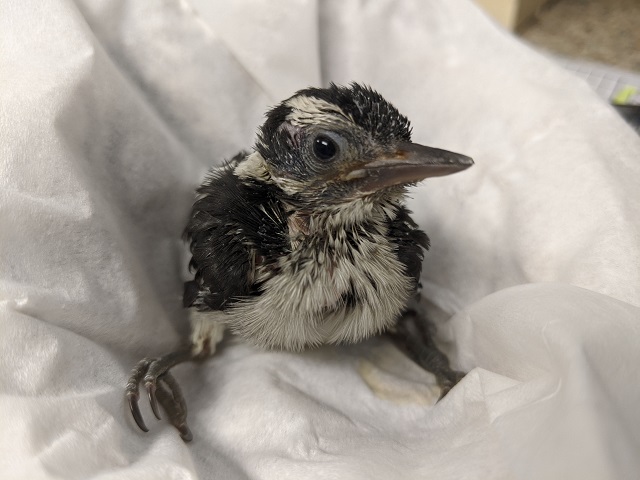 “The bruising was concerning at first because we didn’t know if it would spread up or down the leg in the following 24 hours,” said CROW Rehabilitation Manager Breanna Frankel. “Luckily for this woodpecker, it stayed concentrated to one area and did not have any fractures associated with the bruising. It did not require any additional medical attention like pain medication or splinting.”

Frankel said the patient is almost a month old – nearly a fledgling – based on its feather growth and has taken to eating quite nicely.

“It is currently being fed various soft insects, small pieces of berries and a soft insectivore diet. It gets fed every hour right now from 7 a.m. to 7 p.m. and has a very good appetite,” she said. “As this woodpecker grows and learns to fly, it will be transitioned to an outdoor cage. Over the next three weeks, we will be weaning it off assisted feeds and teaching it to eat on its own. Once it is eating entirely on its own and showing appropriate biological behaviors, it will be released back to the wild.”

According to Frankel, downy woodpeckers start nesting in early spring with peak nesting times between April and May. “The entire nesting season can range from February to July here in Florida, and some nesting pairs can even have two separate clutches in one season.”

Wildlife officials say that property owners must remember various birds such as screech owls and woodpeckers nest in hollowed-out dead trees. While they may appear as an eyesore in a yard, they provide valuable habitat for the creatures inside. If you have to cut down a tree, try to do it in the fall or very early winter to avoid cutting down trees with babies inside.

“During ‘baby season,’ it’s important to avoid landscape work if possible. Late March to July is nesting season for many songbird species, including woodpeckers,” said Frankel. “Woodpeckers, screech owls and other songbirds like great crested flycatchers utilize cavities in dead trees as their nesting sites. By cutting down these dead trees during the spring, you may be putting the nests of these birds in danger. A fall of even just five feet can cause broken bones, significant bruising and even death in some cases. Though the trees may be an eyesore, they bring an abundance of wildlife that is a sight worth seeing.”