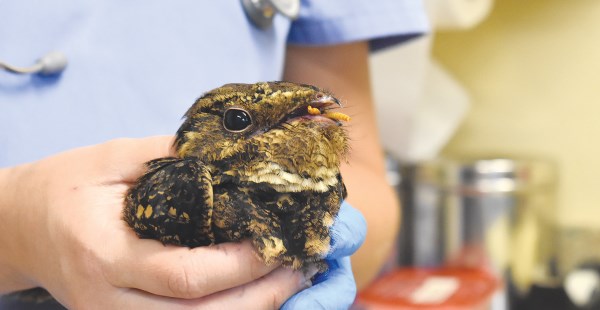 The Chuck-will’s-widow (Antrostomus carolinensis) is a nocturnal bird from the nightjar family, which can be characterized by long wings, short legs and tiny bills. It is an extremely well-camouflaged bird due to its brown coloring and dark patterned feathers. It naturally likes to sit on roadsides at night and can be spotted in headlights where its eyes appear to glow.

If you don’t see them, you may hear their endless call, which they are named for, much like their more famous cousin, the whip-poor-will. The former’s call has a vibrating middle note between two shorter notes, while the latter’s song is quicker, higher-pitched and more piercing to the ears.

At CROW, an adult Chuck-will’s-widow was admitted from Estero after colliding with a window and being found unable to fly. Upon examination, the patient presented with mild ataxia, causing it to have impaired balance and coordination.

“Ataxia means uncoordinated gait. When they hit a window, it can have a stun effect that causes them to be disoriented. We can tell they are disoriented by the wobbly movement,” said Dr. Charlotte Cournoyer, CROW veterinary intern.

In feeding, the patient required assistance.

“This species has more specific dietary needs when in care than some of our patients,” said Dr. Cournoyer. “We tong fed soaked meal worms rather than offer diet, so it was a form of force feeding.”

Veterinarians later confirmed the patient’s symptoms to that of a window strike.

The very next day, the patient showed vast improvement and no signs of ataxia to prove the injury was not a serious one. Recovery was quick.

“If it is very mild, it is not uncommon that one dose of anti-inflammatory and some rest is enough for them to recover quickly,” said Dr. Cournoyer. “Recovery time varies with severity of symptoms.”

After a successful flight test, the patient was released at dusk in Estero. Even after a one-day turnaround, CROW medical staff believed it was the right call to bring the bird in at the time.

“It is a good thing it was brought in since it was having symptoms. If it was not able to walk and fly normally following the window strike, then it is at risk of predation,” said Dr. Cournoyer. “We are happy that it did recover so quickly.”

Before being admitted to the clinic, the patient may have been in the process of migrating to a warmer climate. While some Chuck-will’s-widows winter in Florida, some do migrate to the West Indies, Mexico, Central America and northern South America.

Luckily, the patient did not suffer significance weakness or any temporary paralysis. It may now join its flock and fly south if it intends to do so.