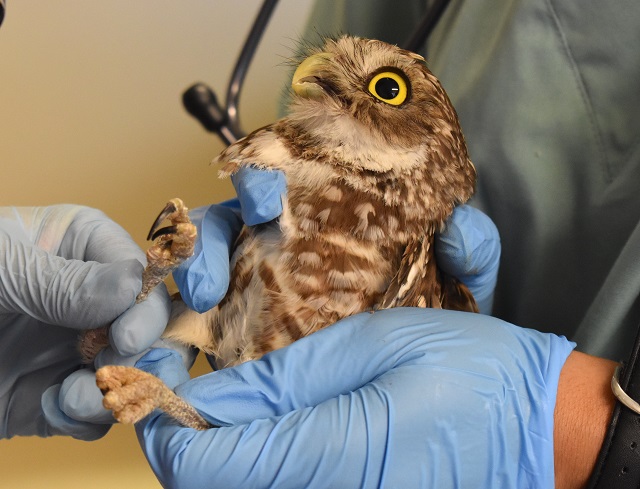 The burrowing owl (Athene cunicularia)is a small owl with long legs, short tail and a rounded head that does not include ear tufts. Unlike most other owls, which are more inclined to live in trees, burrowing owls spend most of their time on the ground or on lower perches.

They are so named because they live underground in burrows that they have either dug themselves or taken over from a tortoise or other keystone species. Burrowing owls also hunt close to the ground, catching insects and small animals. They do this activity during the day when they are most active, another trait that is unlike other owl species.

Burrowing owls in Florida tend to be smaller than those residing in the western part of the country. Both male and female are roughly the same size, another difference from other owl species where the female in larger than the male.

At CROW, an adult burrowing owl was found in Cape Coral after being hit by a car. The wounds suffered from the incident appeared as abrasions across the body, including the eyelid, as well as infections at the sites of the wounds. There was also string embedded in the right foot of the bird that caused constriction injuries.

Upon intake, the wounds were cleaned, and a boot was placed on the foot of the bird. The patient required the use of different foot bandage techniques to best fit the chronic wound, which eventually required amputation of the affected toe. “The bandage was placed to keep the digits in normal position and protect them from further trauma or contamination since the owl was not able to use this foot normally. It was the same foot as the affected toe that was ultimately amputated,” said Dr. Robin Bast, CROW’s staff veterinarian.

CROW medical staff settled on a particular foot bandage that also served as protection. “We placed a ball bandage, which essentially looks like the bird is holding gauze in its foot, and then it is wrapped to keep the digits in normal position,” said Dr. Bast. “When there is nerve damage, the digits may end up in abnormal positions and can result in the bird inadvertently taloning or poking itself with its own foot.”

Overall, toe amputations may or may not restrict the patient’s movement. “It depends on the toe and the species,” said Dr. Bast. “For this owl, the fourth digit is not necessary for hunting so it was okay to remove. They need the hallux – or thumb – to survive though, and the hallux in this bird was not working normally due to nerve and tendon damage.”

While the abrasions healed normally without complications, the affected foot appeared to be too much for the patient’s fate. “Unfortunately, the severity of the constriction wounds resulted in abnormalities in other digits in the affected foot that would have necessitated amputating at least one more digit. This results in the bird placing an uneven distribution of weight to compensate, and it would end up developing abnormal pressure lesions on the other foot – pododermatitis,” said Dr. Bast. “For this reason, further amputations were not possible, and this owl would not have been able to survive in the wild. Due to these quality of life concerns, medical staff made the decision to humanely euthanize this owl.”