CAPE CORAL, Fla (February 12, 2021) – The Clinic for the Rehabilitation for Wildlife (CROW) released an adult bald eagle in Cape Coral, Florida on Friday after a three-month stint in rehab.

The eagle was rescued on November 8 after it was spotted struggling in the water of the South Spreader Waterway just south of Veterans Parkway. The person who spotted the eagle contacted the Florida Fish and Wildlife Conservation Commission (FWC) and an officer arrived shortly after and pulled it from the canal before taking it to a CROW drop-off location. 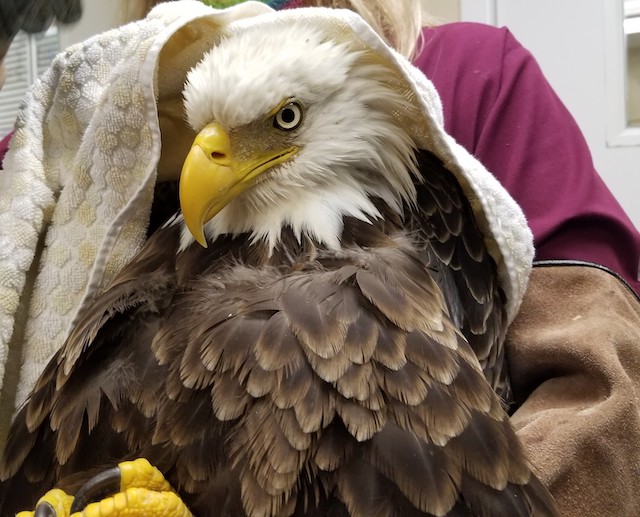 When the eagle arrived to CROW’s wildlife hospital on Sanibel Island the next morning, radiographs determined it had suffered a fractured coracoid, one of the bones in the shoulder that is essential for flight. Veterinarians placed the injured wing in a wrap to immobilize it and allow the bone to heal.

“Thankfully, this type of injury does not need surgery to heal,” says Dr. Sasha Troiano, a veterinary intern at CROW. “By limiting its use of the wing with the wrap, the bones are able to heal on their own.”

After two months of care and rehabilitation, the eagle was cleared for release on January 7. A final check prior to release, however, revealed that the eagle had a cut on its right wing. Due to the location of the injury near one of the joints, veterinarians postponed its release until the wound had healed.

“We cleaned the wound, sutured it closed and then bandaged it,” says Dr. Troiano. “Since the wound was right at the carpus, or wrist joint, it was quite slow to heal.”

After another month of wound management, bandage changes to keep it clean and rehabilitation, the injury healed. Veterinarians once again cleared the eagle for release. It was transported back to the spot where it was pulled from the canal and this time, the release was a success! After flying to a nearby perch and regaining its bearings, the eagle flew off into the distance.

About Clinic for the Rehabilitation of Wildlife (CROW)

Established in 1968, the Clinic for the Rehabilitation of Wildlife (CROW) is a teaching hospital saving the sick, injured and orphaned native and migratory wildlife of Southwest Florida and beyond.  Through state-of-the-art veterinary care, public education programs and an engaging visitor center, CROW works to improve the health of the environment, humans and our animals through wildlife medicine. For more information, or to plan your visit, go to www.crowclinic.org. If you find an animal that is in need of help, call (239) 472-3644 ext. #222.